The Man with the Iron Fists

EXPECTATIONS: Hopefully Eli Roth and Quentin Tarantino gave their buddy the RZA a lot of help with his directorial debut. The RZA clearly has affection for kung-fu movies, but the trailer for The Man with the Iron Fists is really over the top.

REALITY: Driving home from the theater, I flipped on the radio and heard two songs and a political ad that might help explain how the hell The Man with the Iron Fists came to be:

1. PSY's "Gangnam Style." If you don't know what "Gangnam Style" is, crawl back under your rock and wait out the now-inevitable nuclear apocalypse.

2. An ad in which a rape victim champions Oregon Democrat Arnie Roblan for the U.S. Senate. This ad, strangely, is a rebuttal to a previous ad in which a different rape victim claimed Roblan was so soft on crime he was bent on turning Oregon into Candyland for sex offenders. Yeah, Roblan and his opponent, Republican Scott Roberts, are spending the last few days of the Oregon senatorial race running proxy campaigns through rape victims who each claim to speak for the other.

Enter the RZA, who has made another -- for lack of a better term -- post-grindhouse film, one that would be of a piece with Kill Bill, Grindhouse, Black Dynamite, Machete, and Hobo with a Shotgun if it weren't so goddamn terrible. "Terrible" is a tricky word to use when discussing these films, which are all, to some extent, intentionally bad on a formal level. But in those cases, the digital dust and scratches, the asynchronous audio and the missing shots pay goofy homage to '70s trash while genuinely good movies shimmer beneath. The form suits the content as these movies elevate exploitation cinema to high art.

All of those qualities are misappropriated in The Man with the Iron Fists, which makes an incomprehensible mess of a simple plot in which various factions converge on a brothel to steal an already stolen stash of the governor's gold. In addition to directing and co-writing this steaming pile of shit, RZA plays titular iron-fisted character The Blacksmith, who -- thanks to RZA's mediocre acting chops -- eventually gets upstaged by louder, more colorful characters who would be memorable if they weren't so very inscrutable.

So are you assholes entertained yet, or what?!

Consider Jack Knife (Russell Crowe), an Englishman who, upon entering this Chinese brothel, purchases three prostitutes and a fine cognac before gutting a patron with his 19th-century equivalent of an electric meat carver, spraying blood and intestines around the lobby. After a customary moment of focused silence, everyone -- whoremaster Madam Blossom (Lucy Liu), the patrons, the prostitutes and Jack himself -- returns to brothel-lounge gaiety. Jack takes the women upstairs, where he performs unfilmable acts with a stainless steel phallus --

Look, none of this makes any fucking sense. The RZA and co-writer Eli Roth struggle to weave these strands into a plot approaching coherence, and the humor (if it's humor) is so obscure, no one in the audience knows quite what to laugh at. That's especially true once the film delves into The Blacksmith's backstory, which involves black-and-white cinematography, CGI blood, fat white slaveowners shouting epithets at our protagonist, a moment of violence that's comical in tone and nauseating in effect, a shipwreck, and a freed slave shaving his head without salve because he feels a spiritual kinship with the Buddhist monks in Jungle Village, the town in which The Man with the Iron Fists is set.

Finally, the prostitutes decide to steal the gold for themselves, planning to distract men of these various factions with free tricks before they use dental appliances to administer lethal injections of mercury, which, of course, doesn't work on Brass Body (Dave Bautista), who's apparently literally made of brass and none too keen on post-coital murder. This all culminates in a final scene that's wholly derivative of Kill Bill: Vol. 1's House of Blue Leaves sequence.

The Chinese characters conveniently speak English; the CGI effects are among the worst I've seen (and, surprisingly, less convincing than the practical effects that sustained most of the films to which RZA is paying homage); the central villain splits the difference between Matt Damon and Chinese David Bowie; and the whole film serves as an egregious example of the creepy Asian fetishization for which neckbeards are routinely and righteously mocked in every dark corner of the Internet. Sorry, but we should be way past Chinese femme fatales with names like Lady Silk and Chi Chi or Chinese women who apparently have nothing better to do than wait, over the course of days, for Russell Crowe's return so he can penetrate them repeatedly with foreign objects. 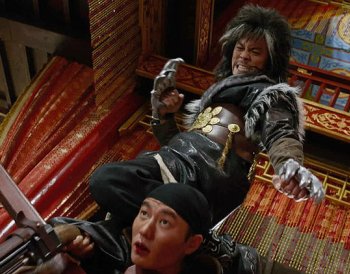 The Other Man with the Iron Doohickeys strikes again.

There's a rumor floating around that this is an incomplete cut of The Man with the Iron Fists, that RZA was forced by someone -- be it Roth, Quentin Tarantino or a studio executive -- to edit this down from his original vision of a two-part movie spread across four hours. While that would explain away the incoherence and the abundance of expository narration, let me be clear: I don't give a shit if this isn't RZA's complete vision.

What's present in this 96-minute cut is a good sign that post-grindhouse has exhausted itself already -- that we're now getting into post-post-grindhouse, in which films are parodic of the art of pastiche itself, genre no longer needs reference points, plot no longer matters and archetypes are reduced to stereotypes. Maybe somewhere in those missing 144 minutes is a shot of Bautista dancing, Gangnam-style, to Justin Bieber's "As Long As You Love Me" while all of Oregon's freed sex offenders frolic in a meadow behind an unsubtitled Chinese sign that reads 'POST-POST-POST-POST-EVERYTHING AZN LULZ MEOW GTFO.'

Maybe if the RZA made The Man with the Iron Fists as a kung-fu movie in earnest, it wouldn't suck so hard, but he failed to achieve whatever tone he was going for, and the only people for whom I could feel empathy were my fellow theatergoers, most of whom sat silent and filed past me, heads down, once the credits finally rolled, 92 minutes too late.

Even the music kinda sucks.

MINORITY REPORT: I like the idea of post-post-Grindhouse cinema. If we can get ourselves twice removed from the schlock that current schlock-spinners are spinning, maybe filmmakers will finally start coming up with new, interesting ideas again purely by accident. - Joseph "Jay Dub" Wade