The Weirdest West Art of Deadlands 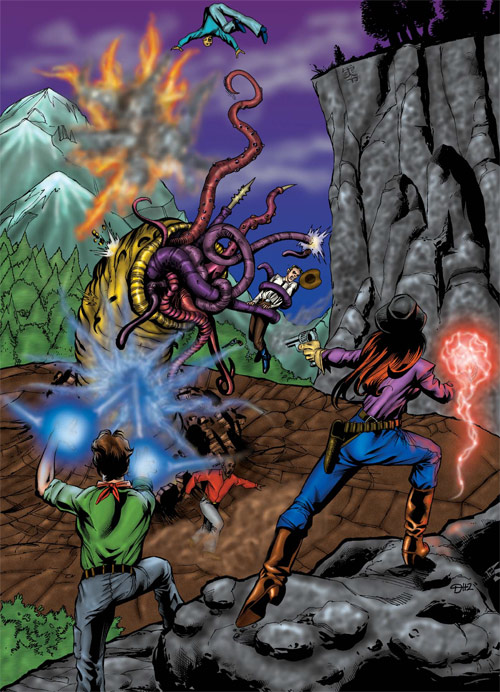 Zack: I think this West may be a little too weird and wild for me.

Steve: Firing energy beams out of their hands at a giant tentacle monster seems a little more Mutants & Masterminds than Deadlands.

Zack: The digital coloring on this one is the worst.

Steve: Speaking of the worst, didn't you have something you wanted to plug?

Zack: Thanks for the kind segue, Steve.

Zack: I have a new short piece of fiction available on Amazon. It's satirical sci-fi called Phrasebook. It's about a Chinese pilot who gets shot down over London and has to use a cheap English phrasebook to convince some kids to help him to safety, all while America is trying to liberate London. It's the first installment of a larger collection of military sci-fi called Outer Echelon.

Steve: Does this Chinese guy fight any skeletons?

Zack: Yes, although they are wrapped in meat at the time.

Steve: Everything is better wrapped in bacon.

Zack: It's not bacon. It's human meat.

Steve: Where can you even buy that?