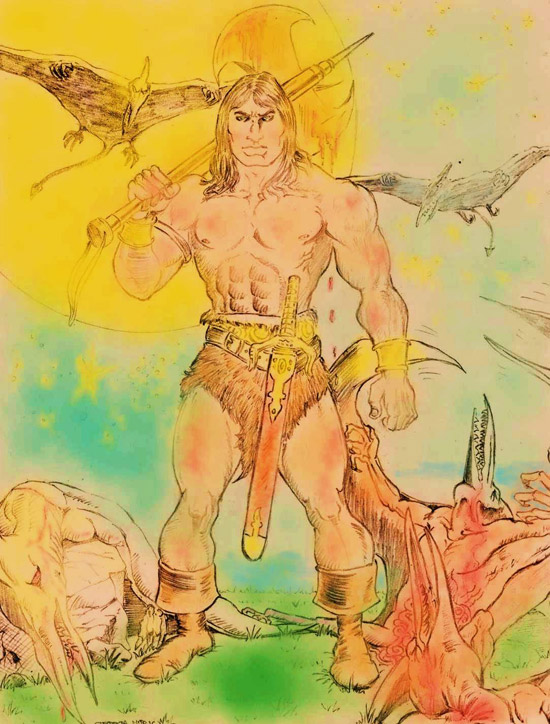 Steve: The sun has not even risen when you feel a sudden premonition of danger.

Steve: A dark shape pops out of the night. It is a black evil figure just like the creatures that destroyed the Tauranian army.

Zack: "For Gunt!" I holler like a hero and wield my mighty sword.

Steve: You slash at the creature, but it drives you back with wicked claw strikes. Causing blood to rip through your body.

Steve: "Ahhh! It's the wizard! He has sent this spirit after me!" Amrastisi shrieks.

Zack: I'm going to do some special moves on this thing.

Zack: I don't know. Like charge up or something.

Steve: That's not a technique you know.

Zack: Okay, how about a roll attack? That's where I do somersaults with my sword sticking out to create a bounce buzzsaw effect.

Steve: You can attempt a roll attack.

Zack: "Roll attack!" Nestor launches himself through the air like a saw blade, bouncing and somersaulting with his sword out.

Steve: Your roll attack doesn't come anywhere near the shadow creature. You sprawl in a ditch, landing painfully on rocks.

Zack: My one weakness.

Steve: As you try to rise you see that the shadow creature has grabbed Amrastisi and it is flying away with her. She's stretching, trying to reach you, her boobs are all jiggling around and she's yelling, "Help me, Nestor!"

Zack: Is there any way I can chase this thing down?

Steve: You try, but it is able to fly which is pretty hard to beat.

Zack: Quick question, did it leave the horses?

Steve: Yes, the horses are unharmed.

Zack: No reason really. But I'm going to eat her horse. She doesn't need it anymore she's just flying around. I need my strength and the best way to keep it is to eater her delicious horse.

Steve: It would actually be pretty difficult to kill her horse with your sword.