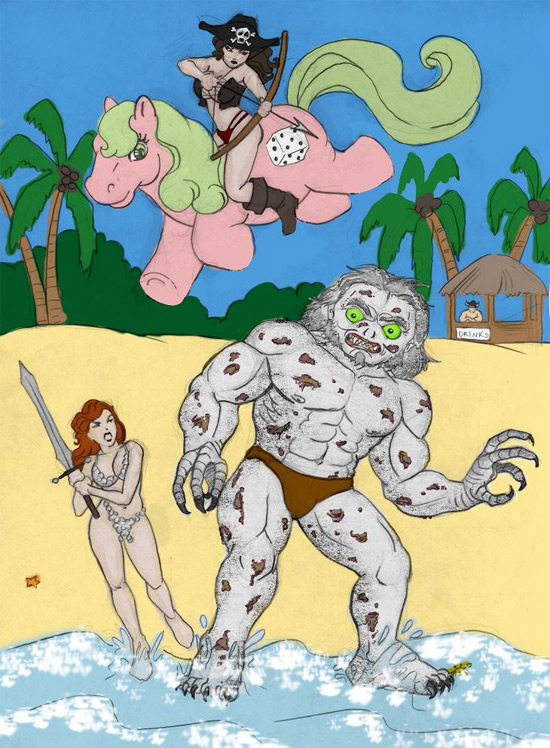 Description: A classic example of violence and roleplaying games destroying lives, this terrible oni was created when a young, scrawny, misunderstood D&D player was shoved into his locker one too many times. 14-year-old Eugene had finally had enough, and decided he needed a guardian to protect himself from all the bullies at school. He took his mom's parakeet, Biscuit, and set out to send it to another plane through the Rifts, exchanging the sweet bird for a powerful demon who would do his bidding. Using the real-life dark magic rituals that everyone knows are described in RPG books, Eugene performed the profane ceremony. But something went wrong! While a mighty oni was indeed summoned, he had some of the parakeet's physical features! And, poor Gene soon discovered, also the bird's personality. Eugene was unable to train the shy, jumpy Biscuit to beat up the school's bullies, but he hopes to attract some hawt babes to his room, "to look at my oni."

Steve: This one is even better than the last one. Man, I am getting so pumped. I loved the story on this one too. The tale of Eugene. It's very believable.

Zack: Eugene is really irritated by these busty ladies breaking up his fun in the sun. "Bro, I'm just tryin' to catch some rays."

Steve: I wonder if these are the same ladies from the last image? Do you know?

Zack: I have no idea, Steve. I doubt it.

Steve: Can you ask them?

Zack: No, sorry, that is totally out of the question and impossible.