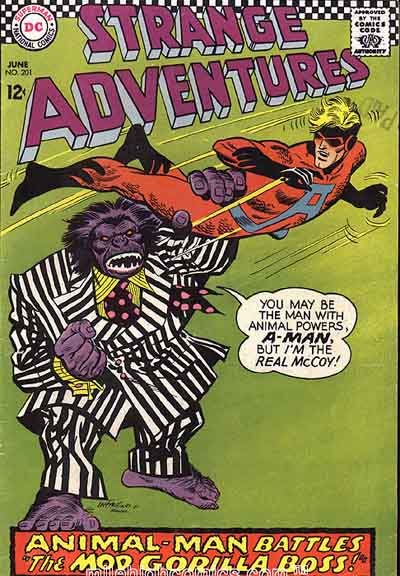 The Mod Gorilla Boss
Appearing In: Strange Adventures #201
Thanks: Horseface

Zack: That is a fucking strange adventure, I'm not going to disagree.

Dr. Thorpe: Yeah, it's not every day that we see a hipster ape grabbing a dude's ass.

Zack: I think he's supposed to be a mobster. He must have escaped from the laziest jail ever. They just paint stripes on the clothes you arrived wearing.

Dr. Thorpe: Yeah, but he's also a mod, for some reason. So not only is he a mob boss ape, but he drives a Vespa and listens to The Jam.

Zack: As someone who knows some Italian people I have to say I am really offended by the stereotypical portrayal of Italians as purple gorillas.

Dr. Thorpe: I know quite a few Italians who just happen to be purple gorillas, but I'm offended that they portray Italian purple gorillas as menacing and violent. And homosexual.

Zack: Well who knows what "A-Man" was doing before the mob gorilla boss had to take care of business. Look at the position the guy is in. It's like he was sledding down a hill, flew into the air, and strayed into the airspace that the gorilla had claimed as his own.

Dr. Thorpe: Check out the look on A-Man's face as that ape grabs his butt. "Friend zone breached!"

Zack: I think A-man is enjoying it based on that blue bulge extending from his midriff.

Dr. Thorpe: Whoa. There are very few things that bulge could be.

Zack: His super suit doesn't have pockets so maybe it's a coin purse or some sort of satchel for his sack lunch.

Dr. Thorpe: It must be hard to find a tailor when you're an evil ape. He can't wear clothes off the rack. Not only because he's an ape, but because he's way too classy to buy normal clothes.

Zack: Would he entrust his unique dimensions to a human tailor or would he risk a gorilla tailor knowing that their thick and fumbling fingers will result in shoddy workmanship? Maybe A-Man was his tailor and he was unsatisfied with the cut of his trousers.

Dr. Thorpe: Either way, it's just hard to imagine him standing still to get fitted for a suit jacket without flying into one of his random ape rages. "You may be a tailor, Mr. Big Shot Suit Man, but I'm a REAL BIG APE, and don't you forget it!"

Zack: I imagine him talking like Big Boss from the old COPS cartoon show. "I'm the boss here, see, and I'm a giant ape too, see? So I run this show, and don't you wiseguys forget it! Mmmmhyyyaaa, see!"

Dr. Thorpe: Yeah, I'm surprised that anyone, man or ape, who claimed to be a mod would let his hair get that unruly.

Zack: Whoever his barber is you can be absolutely certain that the gorilla mob does not have a dental plan.

Dr. Thorpe: Gorillas in the wild eat roots and berries and stuff and pretty much just chill out, but when they become mobsters they start eating rich food and they're under a lot of stress and their teeth really suffer. Which just makes them madder and more prone to grabbing you out of the air for no real reason.

Zack: You never know when a mod mob gorilla will strike you down. You could be minding your business gliding in midair down the boulevard when suddenly a huge and very fresh purple hand will wrap around your most personal of areas.

Dr. Thorpe: So what do you think his powers are? Aside from being really well-dressed and catching things.

Zack: I'm thinking he is very adept at picking parasites from the scalps of fellow mobsters and he is also probably pretty good at rampaging and generally tearing shit up. I can easily imagine him bursting through the display window of a department store and flinging whole racks of clothes down in anger only to be found in the back curiously smelling the inside of a tube of tennis balls.

Dr. Thorpe: Since he's mastered speech, I'd imagine that he's invaluable to the world of science, despite his surly demeanor.

Zack: He is the bridge between humans and those gorillas that learn the sign language for "love" but will never really understand what the word love means. Tragically, Mod Boss Gorilla knows what love means, yet his violent disposition means he will never really experience it.