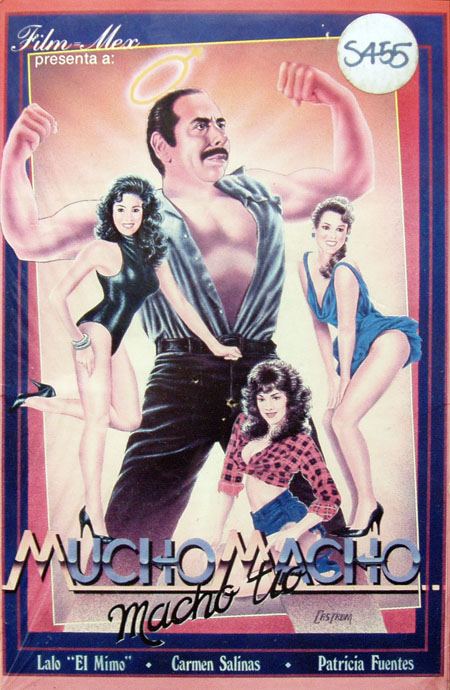 Dr. Thorpe:If you punch Hispanic guys right square in their pubis they become all huge and strong for 30 seconds.

Zack:I think she's knocking to get in. The title of this film leads me to believe this is the hyper-insecure version of the Incredible Hulk. He has to reassure himself over and over again that he is masculine and powerful.

Zack:He just walks around asking women to punch him in the groin so that he'll pop his shirt open and sprout a halo.

Dr. Thorpe:He hires tiny women to hang around him and strike seductive poses so he'll look all huge and irresistible.

Dr. Thorpe:Actually I think those women are supposed to be various aspects of his psyche. The one in spandex represents his fitness, the one in the flannel represents his hardiness, and the one in the hiked-up dress represents his vulnerability. Together they form a man who is mucho macho, but whose softer side is ridiculed by the society in which he lives to the point where he must dress like a gay leather-man and strike manly poses just to assert his maleness. And in the movie, all the women talk to him inside his head like in the avant-garde Fox psychodrama "Herman's Head."

Zack:That's a pretty astute analysis based on this cover, but I think you forgot to consider that whenever he lowers his zipper a slide-whistle plays. That is critical to the plot.

Dr. Thorpe:Oh, yeah, that happens in the dramas too. I watched a Mexican documentary about the Holocaust one time and it played this great little flute trill when a Nazi threw an emaciated Polish Jew off a moving train into a huge burning pile of tires and corpses. It really underscored the human pathos of the scene.

Zack:Schindler's List is a totally different movie if you listen to the Spanish Language track. Half of the movie actually plays at double speed.

Dr. Thorpe:I almost thought it bordered on distasteful when, during dramatic reenactment of Jews being gassed in the infamous "showers," the women simply lathered up and chased each other around grabbing at each other's behinds before eventually making elaborate pratfalls to symbolize death. So, like, I thought it was pretty distasteful, but then I realized how distasteful the Holocaust itself was, and it really made me think about my priorities.

Zack:Yeah, they really manage to layer in the meaning. Like, you can be entertained by their hijinx on one level, but if you stop to think about how ridiculous the movie is then you realize how ridiculous every injustice man inflicts on his fellow man can be. It's a subtle message of peace and healing that I think is lost in the original movie.

Dr. Thorpe:Plus you could probably work one out to it, if you had nothing else going on.

Zack:The Spanish version of Stephen Hawking's movie about the nature of the universe is fucking mind-blowing. It's literally 90 minutes of women wrestling in vegetable oil while a robot made out of tinfoil and carboard boxes sings about sex. Check it out some time. It's called "Los Hombre Robotico Stephen Hawking y Pleasurina Duos"