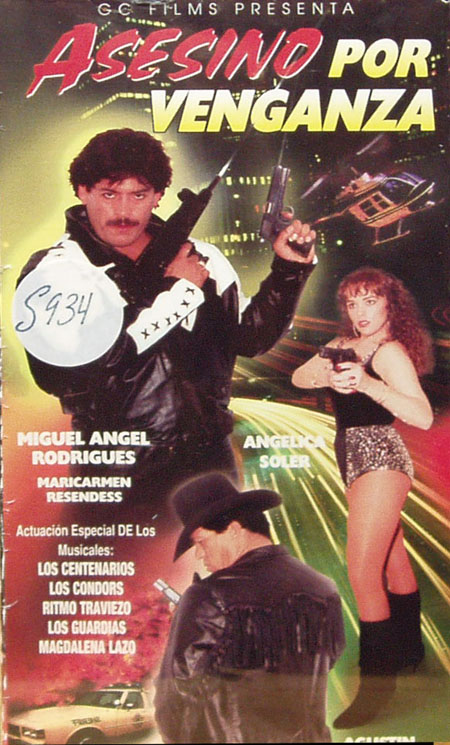 Dr. Thorpe:Looks like we've left our lighthearted action-comedies behind and moved into the real A-list fare.

Zack:The future of Mexico is pretty much the United States twenty years earlier. There will be a scene where the guy is playing Space Invaders and marveling at Informacion Compacto Discos.

Dr. Thorpe:This is supposed to take place in the future? I figured it was the Mexican version of COPS. The woman on there is obviously a surly lesbian cop thrown into a slapdash prostitute costume for a motel sting.

Zack:Hmmm, you could be right. Like I said, the future of Mexico looks a lot like the United States twenty years earlier. If that guy has a big 8-ball on that leather jacket underneath the sticker then you know it's science fiction. Arsenio Hall is probably even in the movie.

Dr. Thorpe:This looks like a movie about a Tex-Mex bar band whose bassist gets killed by a transsexual prostitute, and then the singer and guitarist have to hunt her down POR VENGANZA!

Dr. Thorpe:Asesino is Spanish for "Arsenio."

Zack:is VENGANZA "vagina"? Arsenio for Vagina? Maybe they have to swap Arsenio for a female hostage.

Dr. Thorpe:I think you've got it. Our swarthy hero puts an X on his sleeve every time he sloppily kisses a leathery boob during a dimly-lit sex scene.

Zack:His jacket is going to look like a misprint at the Spaghetti-Os cannery. He's going to need a new one by the time this movie is over. I can feel it. "Bandoleros y leche de 'X'"

Dr. Thorpe:Yeah, he gets so much VENGAZA in this movie that the pile of leopard-print lycra hotpants next to his bed starts to look like a melted prostitute.

Zack:Every time he throws a new pair on the pile a slide-whistle will play and Arsenio will lift his head up from inside the pile like Oscar the Grouch.

Dr. Thorpe:And then we'll be treated to another sickening scene of this guy raking his pubey mustache across a gigantic areola while Los Guardias play a tender synthesizer interlude. It's just impossible to look at the cover of a movie this cheap and sleazy without imagining how nauseating the sex scenes must be.