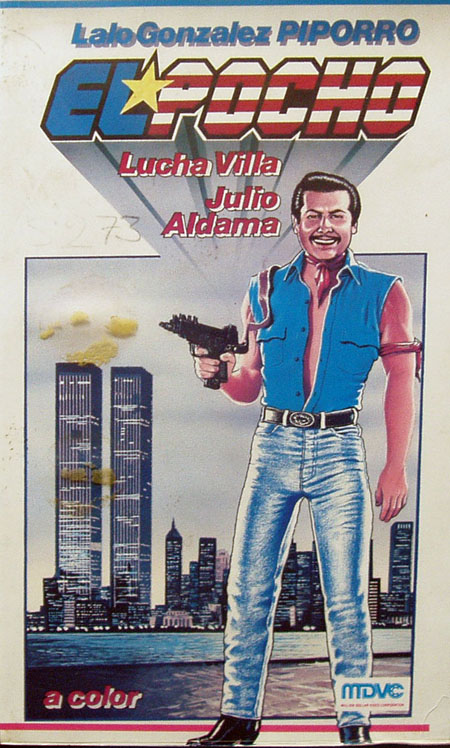 Zack:Smiling is half the battle.

Zack:I would make more fun of how this guy looks, but honestly this movie probably came out at the same time as Invasion USA with Chuck Norris and he didn't look any cooler.

Dr. Thorpe:At least this guy is a little edgier. He's got that big, dopey smile because he just shot up. The belt is still on his arm.

Zack:Is El Pocho protecting New York or is he preparing to do evil?

Dr. Thorpe:God, this movie is so cheap that it's not even in color, it's just in a color. They're trying to fool people by having the word "color" on there but if you watch it the whole thing is just tinted turquoise.

Zack:It's like those old computer monitors that they made amber or green just because people were tired of staring at black and white. In Mexico they gradually phased in color to their movies.

Dr. Thorpe:I think they should tint this one light blue to compliment his badass denim-on-denim look.

Zack:Maybe loop in some footage of a tsunami or something so people might just assume it's taking place in some future underwater world.

Dr. Thorpe:The image of El Pocho is really disturbing. An expression that genial just doesn't match up with an Uzi. You can look that happy with a nice shiny six-shooter, because you look like a non-threatening 50s cowboy. But beaming like that with an Uzi in your hand just seems to say "nothing calms me like the warm euphoria of killing a man."

Zack:Either that or it implies some sort of fish-out-of-water scenario. Like maybe El Pocho was a secret agent who died in the line of duty so Univision or whatever the Mexican CIA is called tracked down El Pocho's brother and dressed him up in the denim and kerchiefs and stuck an Uzi in his hand.

Zack:He's grinning because he's oblivious to the whole ordeal. He thinks he's on TV because his brother told him that he was an actor.

Dr. Thorpe:Little does he know he's a one-man army in the war against the evil rebel group Telemundo.

Zack:Before he knows it he will be in Telemundo's inner sanctum tied to a column while a hostess in a dress so tight that you can see her pulse is dry humping him. A timer counts down. Trumpets blare. The bloodthirsty audience cheers. El Pocho smiles and answers the question correctly, unaware that his life was hanging in the balance.

Dr. Thorpe:And then there's one of those sequences where he accidentally beats up a whole room full of thugs just by turning around really fast while holding a broom, and then they're all lying unconscious on the floor and he says "what happened?" and the woman goes "let's go!" and he's all confused. And his predicament is explained via hamfisted ADR during a car chase.

Zack:There would be a scene immediately after that where the woman is put in jeopardy and El Pocho flashes back to his brother and suddenly musters the resolve to actually save her. But his courage will prove greater than his skill and only by comedic happenstance will he pull off his rescue attempt. He'll drop his Uzi and it will shoot when it hits the ground and kick off a Rube Goldberg series of events in a warehouse full of armed thugs.

Dr. Thorpe:Many bodies will fall over railings and into big stacks of crates.

Zack:Lives will be lost, but blood will not be shed.

Dr. Thorpe:When he somehow defeats the boss of Telemundo, Univision will inexplicably celebrate with a big outdoor party for El Pocho, at which they'll offer him a permanent job in their ranks, and he'll try to do something really suave but he'll end up falling in the pool, and then the movie will end with a freeze frame of everyone laughing.

Zack:I was thinking more along the lines of he is going to make love to the woman at the end and she is sprawled on a bed in sexy lingerie and El Pocho goes to the bathroom to wash up. He smells himself and realizes he has BO so he sprays her perfume on himself, but it gets in his eyes. Unbeknownst to El Pocho the woman has left the bed to watch the sunset on the balcony and the lovable dog that has appeared throughout the movie to save El Pocho is in the bed. Blinded by the perfume El Pocho returns to the bedroom and runs a rose up and down the dog before kissing it on the mouth passionately. Then the woman screams "what are you doing El Pocho?!" and he rubs his eyes and looks at the camera and makes a hilarious face. I do mean a hilarious face.

Dr. Thorpe:Can we at least freeze-frame on the hilarious face at the end? You've got to freeze-frame something. How else do you know the movie's over?

Zack:Yes, freeze-frame it for several seconds and then do one of those bullseye wipes to black.