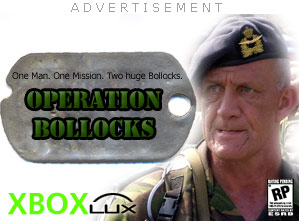 We hack our way through a million unlucky souls on the Houston and Berlin levels of American Hoplite. The graphics are realistic enough to make me believe they're real people, but all of the playable characters are broad-shouldered giants with muscles in places real humans don't even have. I don't think even the world's strongest man can tear the beam out of a building, make it collapse, and then use the beam like a baseball bat.

The pain in my insides is scarcely dimmed by the champagne. I don't dare drink enough of it to really make a difference.

When Dorothy and Mississippi Tar Coon come to collect us they're dressed in the black and gray uniforms being modeled when I arrived.

"You look like a couple of rejected James Bond villains," I tell them.

They're both wearing black leather gloves and they have matching side arms in matching holsters.

"Sweet look you're rockin', dudes," Klint comments as he is straightening his disheveled tuxedo. "Beckah did a good job on that shit."

They lead us back through the mansion, now completely empty, and back outside. My heart sinks at what I see.

There are hundreds of California Marines from the 6th and 7th CMC Regiments out of Pendleton. They're standing in formation in full gray and white MARPAT with combat vests and webbing. Guns out and blood hot, by the look of them.

The Marines are joined by the mercenaries, all of them wearing the ridiculous fascist uniforms designed by Klint's sister. Rollins is wearing one of the uniforms as well, with the addition of an officer's cap festooned with a silver bear's head symbol. I notice that same symbol repeated as a silver-threaded embroidered patch on the arms of the mercenaries.

Howser is wearing a nice suit with his hair slicked back. He's even wearing a pair of wire-rimmed glasses. He smiles at me. I smile back despite the pain wracking my body.

"Holy shit," Jinglebells murmurs as the cameras sweep the spectacle.

"Quite a sight, isn't it?" Howser ushers us in the direction of Klint's helicopter.

"So am I the President now, dude?" Klint asks.

The blood drains from Howser's face and he glances at me.

"They are&," he moves us more quickly toward the helicopter, "they're still sorting that out for the great Republic of California."

He glances warily at the camera, self-conscious of what he's saying on TV for the first time in his life.

"Of course not," he opens the side door of the helicopter, "don't be ridiculous. Now, come along. Come on, everybody aboard."

He ushers everyone aboard and then blocks the door.

"If you fuck this up I will make you die slowly," he hisses.

He's trying to look intimidating. It doesn't work. The presence of the Marines means that Perry is apparently complicit in all this to some degree. That scares me. A jumped up Hollywood cunt like Howser, no matter how many Gestapo bruisers he has on his payroll, is not scaring me in the least.

He stands aside and lets me on the helicopter, but he guides me onto a padded bench between Dorothy and Mississippi.

My eyes are on Eduardo, but he won't look at me.

"Wild job, isn't Eduardo?" I shout to him over the din of the chopper blades starting to spin up. "You look good in that uniform. It fits you."

Like I said, I know Eduardo. He's a real mercenary, lives the life by the code. The first unspoken rule is that you become a gun for hire so you can tell each and every stupid puke of a military officer to fuck right off.

Eduardo replies quietly, his words sucked away by the roaring downwash of the helicopter's counter-rotating blades.