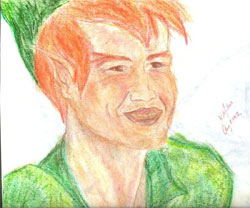 Fortunato was the crappiest wizard I ever met. His spells were very powerful, but with powerful spells is supposed to come powerful responsibility. Fortunato didn't care about that sort of thing. He just did whatever he wanted with his spells and he had a really crummy attitude about it. He would use spells that polluted the environment and he would use area of effect spells when he knew the blast radius would include me.

I endured all of Fortunato's wizard taunts about how I am just a simple barbarian and I am not useful to the party. After every battle Fortunato would point out that I was injured and had suffered a great loss of health and he was unscathed. When Fortuna decided to add insult to injury that dill-hole went too far. At that moment I swore revenge upon Fortunato and his wizardly arrogance. It was so arrogant I knew that I would be able to play upon that arrogance in getting my revenge.

The next time I saw Fortunato was at a tavern in Greyhawk City. He was using his cantrips to amuse and impress patrons of the tavern. He was in no need of coin after the treasure we had won from the dragon Darcholon.

"Hey what's up with you Fortunato?" I bellowed over the noise in the tavern.

"Ah look who it is," he sneered, "my good barbarian friend."

Fortunato said the word good like he meant bad. He pushed the meaty tavern wench up from his lap and her boobs jiggled around in her dress. She giggled and he waved her away dismissively.

She giggled some more and left. He is so arrogant.

"Why do you darken my face on this day Montressor?"

"Ah you are hailed and well met Fortunato. I have just come upon verily a device of infinite wonder that I believe may in fact be of the hallmark of Tenser the great wizard of old and in fact may be a greater version of this device."

"A greater floating disk of Tenser?!" Fortunato sputtered. "How is such a thing possible."

"I was just on my way to Otiluke's to ask them to have a look upon it and decide if it is the genuine article."

"Bah, the Otilukes are hedge wizards!" Fortunato rumbled and twirled his white beard about to and fro. "Though I might know a thing or two about the floating disks of Tenser's creation." 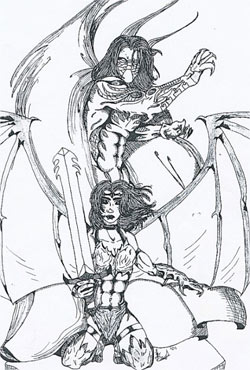 "As you say, 'tis true, for no wizard in all of Greyhawk has such as conspicuous eye as yours when it comes to the subject of floating disks. Perhaps, then, I beseech you to consider making the journey with me to where I have found this disk so that you can judge the worth."

"It is likely a counterfeit," he boasted spilling his wizard cocktail down the front of his robe. "Perhaps one of the gnome vessels or a simple duplicate made in the sandy wastes. I will accompany you."

"My friend I hate to impose upon you in your moments of celebration!"

"It is a burden," his beard coiled ominously, "but alack I bear it willingly to see this scandalous fraud unmasked."

We journeyed to the mountains beyond the city and with difficulty began the slow climb up the gray rocks. Rocks fell and tumbled away under our feet. It was treacherous, but our dexterities proved worthy of the task and we made our way toward the summit.

At an expansive outcropping we paused to rejuvenate and restore our stamina. There I had deposited a lesser floating disk crafted by Mordenkainen. I uncovered it and it lifted up from the ground. Fortunato approached it and examined it.

"This is a fair floating disk," he said, "an amusing bauble for those who do not know one floating disk from the next."

"It is simply a Mordenkainen floating disk. Perhaps you would care to ride upon it, though I know it is beneath one such as yourself."
Fortunato ran gnarled fingers through his curly frip of beard.

"Hm," he considered, "yes, perhaps just a bit before we proceed."

He grunted and pulled himself onto the disk. It lifted about and sluggishly obeyed his instructions, moving about the outcropping where we had made our rest.