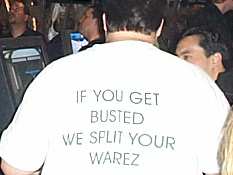 e3 brings out all the WAY COOL PEOPLE!

Okay, now I'll be the first person to admit I was really hyped about the XBox. I figured if anybody could make a good console, it would be the company that makes more money every second than the entire world does in, uh, a year. Or something. However, the Xbox looked like (pardon my French) utter crapola at e3, serving up pre-Playstation 2-esque graphics and a framerate which rivals a used TI-81 graphing calculator. The climax-inducing title Halo, which has been causing gamers across three universes to collectively wet their Spider-Man underoos, looked like crud. Take a generic FPS, add the maps from Giants, subtract 80 frames a second, and you've got Halo. But hey, you get to drive in a JEEP! Around a LAKE! Wow! It's as revolutionary as everybody claimed it would be! JEEP + LAKE + ALIENS + GUNS = GOOD.

There were also a few other titles for the XBox, including a generic "drive your crappy car around the mud," a generic "drive your crappy cartoon character around a racetrack" game, and something called Project Ego. I wasn't terribly excited about Project Ego until I read IGN's XBox coverage, which commanded me to immediately get terribly excited about it.

With the game set in a world that is a complete and on going simulation, things that you do will also affect the game world. If you drop an acorn on the ground, it will eventually grow into a tree that you are able to use for shade or defense.

Project Ego is not yet due until Fall of 2002, but from what was shown today, and if the game continues down the path it is headed, we can possibly be looking at Game of the Year 2002. And it is only on Xbox.

So, although the game is over a year away from being completed, it's safe to say that it will be the greatest game in the history of mankind and if you don't like it you should probably be shipped off to a forced labor camp in Nigeria. You can always depend on sites like IGN, who rely on posting horribly positive previews of a game in exchange for extended media access of the title, to tell you the straight truth! After all, if you read it on a website, it MUST be true! Let me drop an acorn into the mud and watch it grow into an incredible game! Then I'll drive a Jeep to the lake and use them both for defense! Huzzah!

In addition to all this, the XBoxes at e3 were all FAKE! All the models that I saw were simply empty XBox prototypes with all the wires and connectors going straight to a COMPUTER TOWER, housing the XBox components, hidden behind the stand! I personally think that this is a fantastic idea, and if I ever buy an XBox, the first thing I'll do is yank out all the hardware and shove it into my computer case. It's the best of both worlds, except your computer will probably get a better framerate when checking your email.