Soldier of Fortune 2, the sequel to Soldier of Fortune 1, was being shown next door to the Wolfenstein demo. Jake Simpson, Rick Johnson, and the rest of the Raven crew were demoing off their "promoted as being realistic but isn't very realistic because reality pretty much sucks" game, which comes with such exciting features as a glass management system and the ability to animate approximately 15,000 jawbone muscles. This will come in really handy during mission seven of the game, where enemy gang members have taken over a window repair shop and you must defeat them with a chin-mounted mortar. 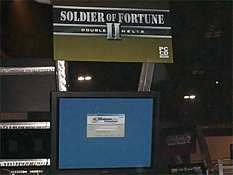 Exclusive shot from SoF2. Don't try to steal this, because I've copyrighted it already.

The animation system was one of the biggest sells for this game, boasting character models of around one zillion polygons and the ability to get shot in hundreds of exotic locations which aren't simply limited to your groin. There were a few Vietnam-esque maps which showed off character animations and squad / team work movement. For example, your squad would animate while they moved. You would shoot at enemy snipers and your teammates would in turn move their eyes back and forth like ping pong balls, obviously attempting to track the tsetse flies that were buzzing around them. After ventilating an enemy soldier and making him a lot more dead, Raven employees would then begin to unload a few thousand rounds into the corpse, making it twitch and dance like a frog on an electrical grid. This feature was quite important, as most gamers know that "cavorting corpses" are high on everybody's gameplay list. Suffice to say, nothing about this game really seemed to stand out to me. Sure, the weather effects and animation potential looked interesting, but they weren't in a good enough stage of development for me to honestly judge them. Since the game is relatively far from shipping, I have faith that it will eventually turn out to be a pretty good product. And hey, if it doesn't, then you heard it here first.

One of the best things about SoF2 was the presence of John Mullins at the booth. In case you don't own a subscription to "Hired Killer Monthly" and haven't heard of him, Mr. Mullins is the man whom the entire SoF franchise was based around. Mr. Mullins has killed various people in Vietnam, Europe, the Middle East, Africa, South America, and many other exotic locations that contained living people who needed to stop living for some reason or another. Now I'm not one to exaggerate, but John Mullins is the best human being in the history of the world. He's just like your wacky lovable uncle, except he's killed a whole shitload of people. In other words, he's just like my wacky lovable uncle. While 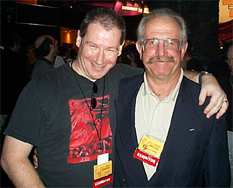 Jake Simpson and John Mullins. Jake is the sissy on the left, and John is the guy who doesn't look like he could murder you in a split second but actually can.talking to Mr. Mullins, I made sure to never offend or annoy him, as I wanted to travel home with a majority of my key organs intact.

ME: "So, who was the fattest man you ever blew up?"
JOHN MULLINS, PROFESSIONAL DEATH MACHINE: "No fat men, but I blew up a hooker's well once."
ME: "Why? Did you find out she was cheating on you with a fat man?"
JOHN MULLINS, KILLER FOR HIRE: "No. But my buddy would drop dead animals into the town's well if he didn't like the hookers there."
ME: "Oh. I thought you were using the term 'well' as a sexual innuendo there for a second."
JOHN MULLINS, PAIN FACTORY: "One time a hooker wouldn't do what I wanted her to do, so I shot through the bottom of her boat."
ME: "What did she do?"
JOHN MULLINS, SOLDIER OF SOLICITATION: "I don't know, I was too busy swimming away from the sinking boat."

As you can tell, Mr. Mullins is one of the greatest people ever. I could've listened to his stories for hours, except Jake Simpson was hanging around and trying to cleverly toss out insults against me. I begged for Mr. Mullins to demonstrate some of his "people-killin' skills" on Jake, but Mr. Mullins said something about there being too many witnesses. "Nonsense!" I shouted while ignoring Jake's one-hundredth consecutive attempt to make fun of my hair. "Just kill them too! There's more than enough death to go around!" Despite my persuasive pleas, Mr. Mullins refused to murder Jake, leaving him free to reminisce about his days working on Midway's Revolution X. Hopefully Mr. Mullins will soon appear as a guest writer on Something Awful, covering the hotly-debated topic about why all zombies are evil and there aren't any "good" zombies who mow your lawn or paint your house or build additions to your deck. I'm not kidding.