After being struck and c-c-c-combo breakered by that insightful email, I felt I had to reply. After all, if I didn’t reply then Mr. Seagal would become angry and set out for justice, and would quickly have me marked for death and under siege on deadly ground, and I would soon be half past dead and burning in the fire down below because he is simply above the law. Besides, I couldn’t let my good friend Derek go on thinking that I have a poor opinion of Koreans’ reading skills! Anyone who sees comments like that on SA and takes them seriously is in need of some special guidance, so I decided to gently inform Señor Derek of his mistake. 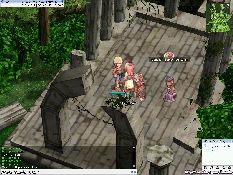 Some of the other players didn't seem to appreciate Shizuka's impressive conversational skills. They got a little fiesty.Tragically, my attempt to reach out and touch Captain Derek’s heart was met with failure. So far he has failed to email me a long and profuse apology, so I can only assume that when I tried to touch his heart my aim was a little off and I accidentally poked him in the stomach and made him giggle like the Pillsbury Dough Boy. Either that or he was so wracked with guilt after seeing his horrible blunder that he immediately swallowed a bowling ball and jumped into a lake. Either way, this is a dark day in the history of SA, and the only way I can possibly cope with it is to move on to the next email.

Along with being allergic to capital letters and punctuation, this next angry internet warrior puts together some of the most bizarre insults I have ever seen.
He also likes
to hit the
enter key
a
lot

Well, it’s only natural to have a problem with “stereotyped motherfucker like you”, that’s something that just can’t be helped. I still like the phrase “dickcunt-sucking shitlick” (I’ll have to ask Zack what that means), and I like how he says he doesn’t know what Koreans really do. Silly Jae Park, I already explained in the original article what Koreans do! They eat dogs! You need to keep up with the material, otherwise you’ll end up asking a question about something that’s already been covered and everyone will laugh at you. That’s not what you want, is it?