Well, those users that wrote the reviews may not have been capable of performing advanced functions like spelling, but they were right about one thing – the quest mode ‘pretty much was stupid’! In fact, the overwhelming stupidity of this action RPG is evident within 5 seconds of starting it up, because you learn that the name of your epic adventure is ‘The Forsaken Dungeon.’ Then Ehrgeiz’s awesome production values are showcased with an intro that consists of a still image splashed on the screen with scrolling text and voiceovers. I couldn’t understand too much of the Japanese, because I spent the majority of my three years of Japanese in high school seeing how far I could golf erasers across the room with a yardstick, but fortunately they provided English subtitles for all us illiterate uncultured Western baboons. This is the story of an archeologist and his impossibly annoying sidekick, who are digging through some ruins when they realize they may theoretically find something in the near future and it might hypothetically turn out to be something really cool. Naturally this gets them all excited. Here’s a summary of their conversation. 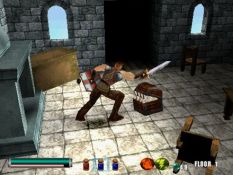 After this intellectually stimulating conversation, you get dumped into a square room in the middle of god-knows-where. And sadly, no matter where you go in this game you’re always trapped in a square room in the middle of god-knows-where. But hey, at least there’s a chance that wherever you are, you just might happen to find a ring that might have been made that may or may not do anything special! That’s a pretty good deal, right? And you also have an assistant to help you out, who follows you around shouting helpful advice such as “Oh, professor! There are stairs over there! Let’s go down them!” I then followed her advice and bolted down the stairs as fast as I could to try and leave her behind, but she stayed on me like a bloodhound. But at least she solved an important dilemma for me! Thanks to her wisdom, I knew that whenever I saw stairs, I should go down them. Although I probably should have ignored her and gone with my original strategy, which was to look blankly at the stairs for a few minutes, then turn the game off and run the Ehrgeiz CD through a grain thresher.

After I exited the ruins through a door, I found myself....in a hotel room. The nice man in the lobby then informed me that I had been attacked and knocked senseless as I left the ruins, and that “I was probably there for the Forsaken Dungeon.” Then he gave me a bunch of weapons and items that the previous guests had left. “Don’t forget to equip them” he told me, right before the game auto-equipped them for me. I left the hotel in search of the Forsaken Dungeon (since apparently that’s what I was there for) and found that, conveniently enough, it happens to be right next to the town I was in. Surprise surprise, the combat in Quest Mode is almost identical to the horrible fighting game, only it takes place in randomly generated dungeons against hopping mushrooms. I was only able to get through about five rooms before I turned the game off, ran screaming out of the room and began injecting transmission fluid into my neck to rid myself of the pain. It didn’t work, in fact I’m fairly sure it increased my level of pain, but at least I was experiencing enough pain to prepare me for the third and final mode of Ehrgeiz - the minigames.