Infinity Battle: Wouldn’t it be cool if fighting games had a mode where you fight a continuous stream of enemies and only recover a small amount of health after each match? You know, like a Survival Mode or something? Well, Ehrgeiz has this new and innovative feature, but instead of being selectable as one of the modes in the fighting game, they stuck it in here as a minigame. It’s exactly as insufferable as the main fighting game, but in this mode the better you are, the longer your suffering lasts. To hasten my death I tried yelling a wide variety of ethnic slurs at the TV to anger the opponent and get him to kill me quickly, but it didn’t work, probably because my opponent was white. And after he showed off his impressive AI by hopping and rolling around the arena for 30 seconds while my guy stared at him motionless, he finally got around to killing me so I could move on to the next minigame. 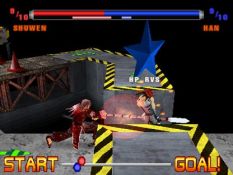 Fight with all your heart! If you don't, the enemy will run in more circles than you, and that would be simply catastrophic!

Battle Runner: Just in case you didn’t think the fighting game was exciting enough before, you can play it while running around in circles! To win this event you need to make a certain number of laps around a short little track that takes you about 5 seconds to run through. You need to outrace your opponent and slow him down by attacking him. I’m actually surprised that Dream Factory hasn’t gotten any death threats over this minigame. The sight of Cloud and Sephiroth throwing goofy-looking punches at each other while running around in circles and repeatedly falling over should be enough to send any Final Fantasy addict into a murderous frenzy.

Battle Beach: Are you ready for...BATTLE BEACH? In case you don’t remember Track & Field or any of those other old games that required you to smash a button repeatedly, Ehrgeiz helpfully reminds you what those games were like – insanely, mind-numbingly retarded. Battle Beach is actually three separate events – a race, a race and a race with hurdles. They’re all almost exactly alike, except in the last one you need to occasionally hit the square button to jump over little logs that have been placed in your way. If you have a grandmother with Parkinson’s disease that until now couldn’t play any games, you can just hold the controller near her hand and watch your guy run so fast the air friction burns his face off. It’s fun for the whole family!

Battle Panel: In yet another ‘take the shitty fighting game we already made and throw in something unrelated to spice it up’ variation, you can now play Ehrgeiz with some Reversi mixed in. You and your opponent run around the grid like idiots, hitting unclaimed squares and trapping the opponent’s colored squares between your colors to switch them. Hitting your opponent sends him skidding backwards as if the board was made of ice, but it uses the same crappy fighting engine as the rest of the game so it isn’t even worth trying to land a hit.

All of these combine to make Ehrgeiz the least pleasant experience I’ve had this year, and that includes the time the dentist did a root canal on me with one hand while tearing out my wisdom teeth with his other hand and using both feet to repeatedly dropkick me in the groin. Dream Factory desperately tried to make the game worth playing by throwing in a whole bunch of stuff, but all they ended up with was an eclectic and varied selection of different types of shit. I assume the idea was to make a self-tribute like Nintendo did with Super Smash Brothers, but something obviously went horribly wrong somewhere along the line. I think it was around the part where they decided to hire Dream Factory to develop it. Unless you are a die-hard FF7 freak who jams colored marbles in his ears to try to enable his head to cast magic spells, avoid this game at all costs.