The fighting game is the heart of the Ehrgeiz experience, in the same way that suffering a painful and gruesome death is the heart of the bowel cancer experience. I’ve played just about every fighting game ever made, including all the King of Fighters games that only differed by the year at the end of the name and the Street Fighter games that were named by randomly combining the words “hyper”, “edition”, “champion” and “turbo.” This “game” does not remind me of any fighting game I’ve played in the past five years. Actually Ehrgeiz’s fighting portion plays like a cheap knockoff of Ballz 3D, a 16-bit fighter that almost four people owned and almost five people have heard of. The game’s advertisements boast ‘interactive arenas’, which is apparently Squaresoft code for ‘some chunks of the level are 10 feet above or below the rest of the level for no good reason.’ This adds an unprecedented level of strategic depth to the gameplay. I mean, what do you do if the opponent jumps up onto a big block? Do you follow him up? Or do you do the unthinkable and not follow him up? The number of strategic possibilities this opens up is unfathomable, unless for some strange reason you can count all the way to 2.

Watching someone else play it can be hilarious if you’re the type of person who used to laugh in school whenever the weird kid freaked out and tried to swallow his own hair. If you have an astoundingly stupid friend (which all of my friends say they do) you can convince him to play Ehrgeiz, then point at him and laugh for an hour straight while the will to live slowly drains out of his body and is replaced by a combination of bile and despair. Why is it so bad, you ask? Well, let’s see...the entire gameplay consists of both players smashing the high and low attack buttons and laughing at the fighters while they awkwardly flail around like giant brain-damaged hummingbirds, keeping this up until an attack actually connects, then continuing the get-hit/fall-down/get-back-up cycle until one of them runs out of life. Also, the block feature in this game is unlike any I’ve seen before. Normally the idea of blocking is to prevent your opponent from hitting you, but when you hold the block button in Ehrgeiz, your guy just puts his hands up as if to say “Excuse me, if you aren’t too terribly busy hitting me, would you mind taking a break from it so you can devote more of your attention to not hitting me?” before being smashed with an uppercut that launches him into the stratosphere. Every time one of the Ehrgeiz fighters lands a hit, it sends the other guy careening through the air and crashing to the arena floor, even if all you did was land a vicious left jab to his big toe. And every time you do something extraordinary, a big green number pops up to show you how many points you’ve earned for your heroic action. Heroic actions include:

Hitting the other guy

Hitting the other guy twice

Hitting the other guy twice and then kicking him

Not hitting the other guy

Falling on the ground and laying there twitching 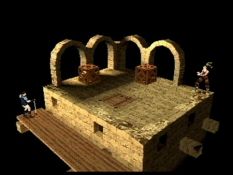 See the amount of interactivity the arenas have? I mean, just look! The guy on the left is lower than the guy on the right! Isn't that crazy?

When you go from watching to playing, it doesn’t get any better. In fact, I believe it becomes the exact opposite of better, which, according to my calculations, would be ‘worse.’ The first thing you’ll notice is that there are only three functions assigned to the four face buttons in the default control setup, so ‘high attack’ is assigned to two different buttons. This isn’t a problem until you realize that to do a medium attack you have to smash the high and low attack buttons at the same time. I have no idea why Dream Factory didn’t simply assign medium attacks to the fourth button, and I suspect they have no idea either. They did the same thing with throws – you have to hit guard + high attack + low attack to throw someone, even though the controller has three different commands that are bound to two buttons and just wasting controller space. It’s a good thing these not-too-resourceful designers didn’t have to make Ehrgeiz for the NES or any other system with fewer than 10 buttons on the controller. They’d probably have ‘guard’ assigned to every single button, and to do anything besides guard you have to hit guard repeatedly to tap out instructions in morse code. Although now that I think about it, this would be a lot more responsive than the controls they currently use.

Fortunately I didn’t have to spend a lot of time playing before I beat Arcade mode, because the horrendously bad AI put up no fight at all. I picked Cloud Stryfe, since he was one of three characters in the starting lineup that was actually from FF7. As soon as every round started I ran away from my opponent and hit the special button to pull out my sword, which resembled a big dirty piece of sheet metal glued to a pair of chopsticks. Then I relentlessly attacked by pounding on the high attack button, which made Cloud start clumsily swinging his sword around like he was trying to swat a fly. The enemy, seeing this innovative and unpredictable attack pattern, would shrewdly decide to walk forward until my sword knocked him on his ass, then get up and get knocked back down again until he was dead.

Using this technique, I was able to beat everyone in Arcade mode on my first try without losing a single round. In fact, I don’t think I ever took more than 20% damage. But I decided not to play the fighting game anymore, because I had a hot date that night – with the Quest Mode!