After plodding all the way through this labyrinth of pain, I finally made it to the end of the stage. I knew it was the end because the purple-shirted fruitcake showed up right in front of me and told me “It’s.” He then added “MINE!!!!” before taking off running with my database. I had seen a number of James Bond movies, so I knew what to do in this kind of situation. First I unleashed a barrage of retarded and nonsensical database-related quips (I believe it was something along the lines of “My pistol will perform a SELECT query on a bullet and then use it to perform an INSERT INTO query on your head and truncate your life, you denormalized villain!”) and took off in hot pursuit. He was running in a straight line and I was constantly emptying my assault rifle into his back, but naturally this didn’t really bother him. He ran up a bunch of stairs at the end of the hall, but when I tried to pursue him, it stopped me around the third floor and said “MISSION COMPLETE”. I’m not quite sure why it thought my mission was complete, since my mission was to retreive the database that Captain McPurpleshirt had just run away with, but hey, I wasn’t going to argue. It meant I could quit playing and get back to doing more productive things, like pulling up all the floor tiles in my bathroom and flinging them out the window at passing cars. 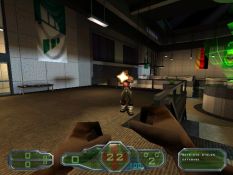 I noticed the enemies in this game were not very bright, so I killed everyone in the room except this guy, then stood still and timed him while he continually shot at me and reloaded. It took him 12 seconds to hit me once.In case you ever commit a felony and decide to punish yourself by playing this game, you should probably be familiar with the different enemies who you’ll get to see shoot in your general direction. Most of them are so stupid that you’ll have to force yourself to stop laughing before being able to perform the complicated and time-consuming task of putting your white dot on the enemy’s head and clicking until he falls over.

Mr. Grunt: Every game needs a basic enemy that hangs out in every single level along with its 50 identical twin brothers, even one as bad as Gore: Ultimate Soldier. For some reason unknown to everybody else but him (and probably unknown to him), Mr. Grunt decided not to dress in an army outfit like every other grunt enemy does, and instead put on an ugly red tank top and some skydiving goggles. He also possesses the rare ability to fire at you from across the room and have every shot land somewhere in the middle of the Pacific Ocean. If you ever get damaged by this enemy, you obviously have a very long list of mental defects and you should probably be off eating dry-erase markers or posting on the Fark forums.

Fat Eddie: I guess I can’t really blame The Mob for hiring this guy, since their armed soldiers can handle their guns about as well as a handicapped 12-year-old with down’s syndrome and no fingers. Fat Eddie will put the fear of God in your heart, as he slowly ambles toward you yelling bone-chilling things like “Freeze, jackass!” and “Where’s the party?” Once he reaches you, he starts swinging his arms back and forth like a one-man conga line and making cartoony “POW!” noises while your health drains away. If you have any AI friendlies around, they will almost certainly be killed by Fat Eddie, since none of them have spent enough time in training to learn the advanced tactic of “backing up.” When you encounter this enemy, I recommend pointing at your AI buddies and laughing while they get mauled, then shooting Fat Eddie in the head when he comes for you. This will cause him to fall over and die while making a high-pitched shriek that sounds like a mouse getting its testicles crushed with a hammer.

Raver Grrl: The Raver Grrl is a sneaky enemy, since she cleverly disguises herself as a member of your team by wearing a white shirt. To tell whether or not a white-shirted person in a room is a Raver Grrl, look for the telltale signs – spiky red hair, an obnoxious voice and a tendency to point her gun at you and repeatedly pull the trigger. She doesn’t miss as often as Mr. Grunt, but she stands in one place while she fires and can be easily dispatched with two bullets to the head or a single punch. After you punch or shoot her, she drops her gun and pauses for a second as if to say “you punched or shot me, and as a result I have dropped my gun and I am pausing for a second” and then collapses with a “Guhhhh” sound. Oh, and she has a really retarded look on her face when she dies.

Evil Jesus: I've heard that Jesus spent most of his time healing people and making wine, but this game suggests differently. Apparently he spent all his time running around inside military bases and whacking people with little wooden sticks. Whenever you hear a series of ‘whack’ noises and notice that your health has taken a drastic plunge from 76 to 74, turn around. There is most likely an Evil Jesus there, happily smacking you with his sticks, blissfully unaware of the pitifully small amounts of damage he is inflicting. I had hoped that the blasphemy of including an enemy who looks exactly like Jesus would result in the 4D Rulers offices being firebombed by angry Christians, but no such luck. Hopefully for Gore 2 they’ll include Allah as an enemy, and he’ll fly around the levels eating pork and chanting “Arabs are pussies” while holding up a map showing the location of the 4D Rulers buildings.

There were a few more enemies, but I can’t quite bring myself to mention them, mostly because this game has sapped my will to live and replaced it with a very strong will to die. I know this is supposed to be a budget title, but even by that standard it’s absolutely terrible. That can be reflected in the fact that just about every reviewer alive has shredded it apart, including me, and I’m not even a real reviewer. But if the people at 4D Rulers ever feel bad about their game, they can at least be content knowing that IGN gave it an 8/10. I know that’s like trying to make an author feel better by pointing out that their universally deplored book was at least appreciated by the creepy old insane guy down at Pike’s Market who spends all day yelling at traffic lights, but at least it’s something.