Super Speed: In a blatant display of false advertising, the description for this superpower proudly declares that you can “Run circles around evildoers with the speed of a cheetah!” All it really does is make your superhero blur while he does his little shuffling walk towards your mouse cursor at about the speed of the bike from Paperboy. But I suppose that is an improvement over his normal walk, which goes about the speed of the guy from Paperboy after an insane homeowner ran out into the street and clubbed him over the head with a baseball bat. 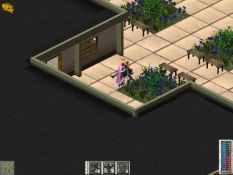 Right as one of the bikers started punching me, a guy knocked on my door. I left the game unpaused while the biker kept punching me and went to answer the door, and it turned out to be a guy selling Pizza Hut coupon books. After he went through his sales pitch, argued with me after I said no and then left, I went back to the computer and saw that I still had half my health. I wish I was kidding.

Super Strength: In case you’re playing with a broken index finger and don’t want to click the mouse any more than necessary, equip yourself with Super Strength! It assists you by narrowing down the tactical possibilities you will have to face when you’re walking from room to room finding bikers to punch in the face. See, normally Hero X combat is complex enough to daunt even a master tactician – you can click on an enemy twice, you can click on an enemy, pause and then click him again, you can run around for five minutes to piss him off and then click on him twice, or you can quit, climb in your car and drive into a tree. All of these strategic options will result in the enemy falling over (except for the last one, which will result in you falling over) but there are a lot of options to consider when deciding which ones to use. For example, do you have a mouse? Does it have a functional button? Do you possess some sort of appendage which can be used to repeatedly press the button? But Super Strength removes all of the questions and uncertainty – simply click on the enemy once and watch him fall and die while you sit with a fading smile on your face, half-heartedly reassuring yourself that defeating that enemy required a massive amount of skill on your part.

Telekinesis: In case left-clicking on enemies to punch them is too laborious for you, you can be “hip” and “change it up” by right-clicking on them! Instead of punching the biker in front of you, your superhero will tap into the vast unknown potential of the human mind, and use this vast potential to push the guy back about five feet. He won’t take any damage, but he also won’t notice that he got pushed and he’ll keep punching at the air in front of him. Bikers sure are retarded.

ESP: When you’re fighting swarms of idiots in leather jackets, you have to know what they’re thinking. After all, the ingenious tactics Hero X’s enemies use range from walking up and punching you to NOT walking up and NOT punching you, and sometimes a clever combination of both. That’s why you should always be sure to equip the ESP skill – you have to stand motionless and not do anything else in order to use it, but while you’re standing there getting repeatedly punched by four enemies you’ll at least know that they’re thinking deep thoughts like “This is gonna get messy” and “I need a new bike.” Not only does my superhero fail to strike fear into the hearts of his enemies, but they’re so bored when they’re fighting him that they drift off and fantasize about their bikes. How sad. 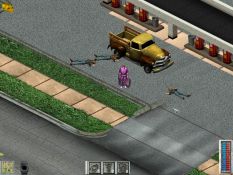 I really wish I knew why that piece of cheese is always there in the corner. Actually, no I don't.

Once you go through the deep and involving process of creating a guy, you get thrust into a rousing and epic superhero saga. Your mission - should you choose to accept it or not, it really doesn’t matter - is to rescue a scientist from a biker and his 200 identical twin brothers who are perpetrating the heinous crime of walking around his house. You also begin to doubt that the guy is a brilliant scientist when you notice that the inside of his house resembles my apartment, meaning it looks like a garbage truck overturned inside it and then exploded. Upon seeing you, the bikers cleverly lock the door in front of you while ignoring the open door 20 yards to the right, then they seamlessly shift into phase 2 of their anti-superhero plan and stand there doing nothing.

At that point you begin walking around the house using Blizzard’s patented “uh, click where you want to go, or click what you want to kill, durrrrr” game engine. Unfortunately Hero X’s UCWYWTGOCWYWTKD engine is nowhere near as good as Diablo’s, primarily because your superhero displays the pathfinding skills of a blind elderly man who was spun around three times, dropped face-down on the sidewalk and then had his head filled with cement. Even when you’re out in the open, your superhero has an amazingly hard time finding a mouse cursor 20 feet in front of him, perhaps because I never found the secret code that lets you unlock the hidden superhero ability known as “walking forward.”

Once you get within two feet of a biker, prepare to experience the finest combat system the budget PC gaming industry has to offer. First the bikers will all run up right in front of you, displaying pathfinding skills that are far superior to yours. Then they’ll start spastically swinging their fists around while the same annoying muffled “whack” effect starts thumping through your speakers approximately 40 times per second. Each punch inflicts approximately 1x10-12 percent of your total health in damage, so if you’re in a mental state where you might actually be killed by these enemies, you’ll probably only be able to play for a few minutes before you drool on your mouse or try to eat it. If you decide to fight back, you have to be a bad enough dude to click on each enemy twice. This makes your hero imitate their fist-swinging motion while little comic book sound bubbles appear over their heads, some of them containing words like “ZAP” and “MEH” which are not normally recognized as punching noises.

After you save the dopey scientist, you embark on a fantastic journey that involves storming the bikers’ hideout (going to the spot marked “Biker’s Hideout” on the city map and killing a few dozen more bikers) and then performing more missions and upgrading your superhero abilities. Unfortunately for everyone who has played this game (me and the head developer’s mother) you only need to play for about 30 seconds to know what the entire rest of the game is like. But fortunately they didn’t go for length, or more likely they did and failed horribly, because the game can be beaten in under six hours. I spent so much time creating Captain Fishflake and customizing his cool superhero abilities, and he only got to use them for a few hours. What a tragedy.

But suffering through this game has given me my own personal superhero mission – to find whoever programmed this monstrosity, cut his fingers off and mail each one to a separate continent to prevent him from programming anything ever again. You math geniuses out there might have noticed a problem with my plan, but don’t worry – I firmly refuse to believe that anyone responsible for banging out this horrible mess of code could possibly have more than seven fingers.