Monster Jam’s gameplay is way too terrible to be saved by good graphics, so UbiSoft wisely decided not to bother including graphics that are any more photogenic than a bloated dead pigeon. The arenas look like the developers were trying to keep the overall polygon count in the single-digits so they would have more time to spend creating the two or three different textures in each stage. The horrible camera puts Super Mario Sunshine’s horrible camera to shame, spastically twitching back and forth whenever your car does something foolish like change directions or accelerate. And when a truck gets destroyed, it comes to a halt and spews chunky yellow silly string all over the place for a good ten seconds before magically winking out of existence, never to be seen or targeted by a fat bottle-throwing hillbilly again. 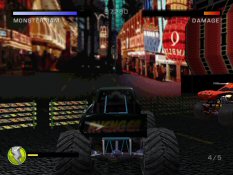 The art team didn't feel like modelling any objects in the distance, so they just textured the backgrounds onto the edge of the maps. This saved them hours of valuable time, most of which was spent mumbling and drooling on the keyboard.The deathmatch mode was enough to offer a decently high level of destruction, but the Monster Jam team didn’t want to rest until they had created a product that offered MAXIMUM DESTRUCTION! Since fixing all of the game’s horrible flaws would have been “all hard and stuff, I WANT TO GO HOME oh hey a penny” according to the project manager’s verbal status report, they decided to instead add a small collection of minigames. Note that most of these aren’t “minigames” so much as “a scenario from the main game with a minor change.”

Stadium Freestyle: If for some reason the idea of watching trucks driven by toothless neo-confederates slowly ram into each other doesn’t excite and titillate you, you can instead watch a single truck drive around an empty arena running into random objects! In this mode you drive around crashing into the hay bales and metal poles some incompetent groundskeeper has left scattered all over the arena, and you get money for knocking stuff over and doing wheelies. And for some reason, in this mode and this mode only, whenever you land from a jump your wheels sink halfway into the ground and then spring back up like a big glob of silly putty. Also the camera stays in a fixed position the entire time, because monster trucks are all about getting fans on their feet and let’s face it, being able to see where the hell you’re going doesn’t get anybody on their feet!

Stadium Race: If demolition derbies and “stadium freestyles” just don’t lube up your engine, you can decide to compete in the manly art of slowly driving around in circles. All you have to do is drive around a slightly bumpy dirt track that takes 15 seconds to clear, and the only challenge comes from the fact that the slighest tap from any direction will cause your truck’s speed to instantly drop to 2 miles per hour. 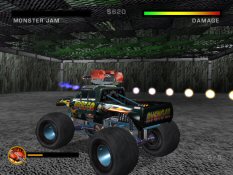 Lava Island: This is exactly like a standard deathmatch, only it takes place on top of a volcano. I don’t know how they managed to make driving trucks around on top of a volcano boring, but somehow they pulled it off. The only difference between this and a standard deathmatch is that you can knock people off the side of the volcano (which is completely flat except for a pointy part in the middle) at which point they fall about 20 feet into the black void before their car catches fire, abruptly stops falling without any kind of impact and then disappears.

Canyon Race: This race is exactly like a Stadium Race only with a different course. I’m guessing they put it in as a completely separate minigame because they had worked hard on making this one extra course and were very proud of their accomplishment, almost as proud as Monster Jam’s head developer was when he managed to put his pants on without anybody else’s help and was nearly able to not put them on backwards. Also there’s an incredibly easy shortcut 30 seconds into the race where you can make a left turn where you’re not supposed to, travel the wrong way for a few seconds and then cross the finish line a full minute before any of the retarded AI drivers do.

Stadium Challenge: It’s exactly like Stadium Race mode, only it’s a deathmatch instead of a race. Why, then, did they call this a minigame instead of simply making “Stadium” a selectable stage in deathmatch mode? I don’t think modern science is prepared to answer this question, and if it is then it’d better keep its damn mouth shut unless it wants to fall down the stairs again.

Arena Challenge: This is a deathmatch in the same Coliseum level that’s available in the standard deathmatch play. The only difference is that the only hallway connected to the starting area is blocked off, so instead of being able to move around the level you have to stay in the main courtyard during your noble quest to make all the other trucks catch on fire and vanish.

If you manage to go through all the modes, you are a better man than I (I got through all the modes too, but you would still be a better man than I for a variety of other reasons). Playing this terrible game makes me want to go to a monster truck event holding a large sheet of plexiglass and yell anti-confederate slogans while angry rednecks charge me and brain themselves on the glass like birds. Hopefully constant exposure to monster truck racing will eventually lower the collective redneck IQ to the point where they forget how to mate and produce little rednecklets whose only information about life comes from watching Dukes of Hazzard reruns. But until that glorious day comes, the world will be a much noisier place thanks to monster trucks, and the gaming world will be a much crappier and more terrible place thanks to games like Monster Jam.