Speaking of which, your guy acts like he’s been spending the last hour inhaling spraypaint while simultaneously taking various exotic drugs from the Exotic Drugs Sampler Platter at Shari’s. Every time you go up a step, you bounce your head a good two feet up and down several times before returning to normal. Pressing the jump button launches you 20 or 30 feet in the air, at which point you bash your head on the ceiling and land feeling dizzy, both from the blow to the head and from being drunk on love for the Lord. But mostly from the blow to the head. And if you ever manage to fall into a pit despite having magical pogo shoes, you let out a hilariously exaggerated scream, plunge into the darkness and.....reappear right back where you were with a small deduction from your health. The forces of darkness are a lot more forgiving than the bible makes them out to be. 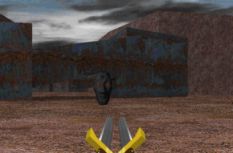 Every time I encountered one of these damn masks I tried squinting and pretending I was fighting Andross from Star Fox, but my complete and utter lack of enjoyment quickly reminded me that I was actually playing Saints of Virtue.Don’t worry though, you won’t need to actually subject yourself to the game to see how insane the people who made this thing were. All you need to do is take a look at the opening movie and the menu. I was hoping it would start with an audience yelling “SAINTS.....OF.....VIRTUE!!” in the exact same way the NBC studio audience yells at the beginning of Wheel of Fortune, but no such luck. Instead we get a Doom-style menu with music by a band called ‘New Jerusalem.’ The song is only about 20 seconds long, but it’s still horrible enough to make your eardrums scream in agony and try to commit suicide by crawling through your ear canal and down your throat to dissolve themselves in your stomach acid. Then if you choose to view the intro movie, you get to see a badly-decompressed CG sequence showing a kid who claims to be a warrior, and apparently manages to defeat the powers of Satan by simply standing in his room and clenching and unclenching his fists a whole bunch of times. After seeing this heartwarming and uplifting movie and attempting to change my controls before discovering that you can’t, I decided to try playing the game, and, well, look at every single paragraph above this one if you want to know how that turned out. 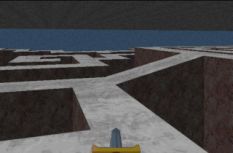 Nothing says "Hooray for Jesus" quite like a granite hedge maze!

First we get Bible Adventures for the Nintendo. Then King of Kings, Sunday Friday and Super 3D Noah’s Ark. Then that other godawful Christan FPS that was reviewed a while ago. Now this. How hard is it to make a Christian game fun? I know a Christian game can’t be fun if it makes you answer bible trivia to get extra lives like King of Kings did, but you’d think they could just make a simple Q3 engine based shooter and slap bible characters into it or something. You Christians need to do something to compete with the other religions, since Jews have that kickass dreidel game and Muslims get to play the game where you bow to Mecca five times a day or else you get a Game Over and Allah blasts you through the head with a lightning bolt while nearby teenage punk Muslims yell “Ohhh, AWP headshot! El oh el!”

I have no idea what the ending is, since I never beat the game and found the true magic of life, love, friendship and happiness, but I’m guessing it involves another intense action scene of the freaky kid standing in one spot grabbing at the air and bragging about what a mighty warrior he is to nobody in particular. Since I never saw the ending I can’t say that the game has taught me much about being a Christian. However, it has taught me one extremely important thing – if God does exist and I go to hell when I die, then while I’m laying in the pit of fire being force-fed my own toenails by angry demons, I will still be thankful that I’m not up in heaven playing Saints of Virtue.