Stuff You Will Hate! 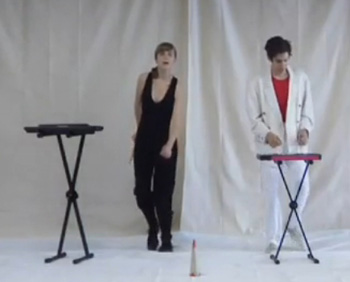 Sgt. D: I'm sure these indie jerks think this annoying video is very clever, and I get the joke: "This video is BAD ON PURPOSE! For example, look how absurd their outfits are! The people are extremely unfashionable and lack the self-awareness to know it, which makes it that much more amusing! And look at how bad the dancing is! It breaks from the convention of putting talented dancers in music videos! Instead, they're deliberately using extremely amateurish dancers for comedic effect. Get it?!" I think Spike Jonez did the whole "ironic dancing" thing a long time ago. Just a heads up, kids: if you're stealing ideas from fucking Fatboy Slim, it's official that you are creatively bankrupt. At that point, the only way you could stoop any lower would be to borrow lines from Crazy Town (RIP DJ AM). 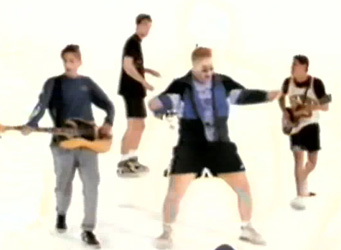 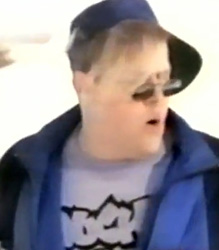 GD: Back in 1991, these guys faced the same obstacles as YACHT. They didn't have enough money to afford anything but a plain white backdrop for the majority of their video, and they couldn't muster enough musical ability to create anything but an extremely basic and repetitive song. But instead of winking about their shortcomings until blood trickled from their eyes, they just went about their work. They even let a dog run around the set, which really boosted their likability, mostly because it didn't feel like a calculated dogs-boost-likability gambit. Mucky Pup sucked, but at least they didn't seem desperate.

Mucky Pup sounded like The Offspring in wacky novelty mode, except Mucky Pup's singer was even dumpier looking and occasionally sang in tune. You don't see many unselfconscious ugly dudes like this in bands anymore, let alone upbeat ones. But really, they had a dog, they had dancing girls -- what did Mucky Pup have to mope about?