Stuff You Will Hate 4: In Space! 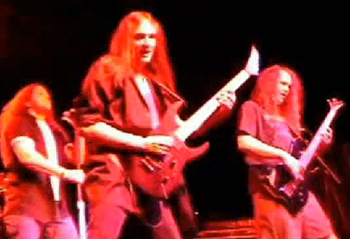 Frankenshred, "In for the Kill"
There are few things more pathetic than a clueless old man who doesn't realize that his best days are behind him. This video reminds me of my deluded uncle, who worked at some bottom-shelf fish 'n' chips chain in Seattle. At every family gathering, he would tell us that his days as a fry cook were numbered, because his band (a low-rent Pearl Jam clone) was about to blow up. I had to tell him "look uncle, no one will ever care about your shitty grunge band 'Botch.'" Anyway, this group's guitarist does pretty much what you'd expect from someone who goes by "Dr. Frankenshred" (that is, he twiddles his way through speed-metal solos while making goofy faces and wearing an overcoat), so he's ready for bar-band immortality. But I'll offer a few points of advice to the other dudes in the band:

Bassist:
No matter how many creepy, toothy grins you flash at the rancid hags in the crowd, they will not fuck you. Ever.

Singer:
I'm not sure what your day job is, but you probably have some soul-raping gig like being the guy who refuels the school buses at the end of the day. I bet you are good at it, too, since you've been doing it for 20 years because they're cool about giving you a week off every year to "tour." I think you should stick to that, and it looks like those bored people in the audience would also rather watch you fill those gas tanks, build a ship-in-a-bottle, or do just about anything other than sing dumb words for a used-to-be/should-still-be-instrumental novelty-metal band. --Sgt. D 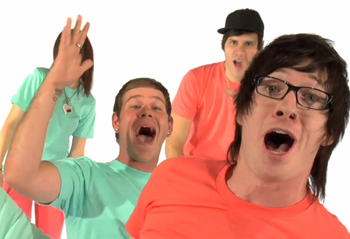 Teen Hearts, "Hands in the Air"

The worst thing about the current plague of ironically shitty bands, other than the songs, is that whenever you find something that appears to be the purest incarnation of musical evil you've ever encountered, you're forced to play devil's advocate and say "What if it's supposed to suck?" This doesn't happen anywhere else in life. When people commit a terrible crime, they usually intended to commit the terrible crime they ended up committing. You rarely see a dude kill another dude and he didn't mean it. But everything about Teen Hearts is so fucking awful that it must be a parody of the scene it ostensibly embodies, right? Even the people who get upset about Teen Hearts seem cartoonish and insincere, like they're a parody of disproportionate, inarticulate outrage. Can this be fucking serious?

That kind of thing is pretty common these days: Contrived joke band attracts clueless fans, inspires witless bashing. But then people told me about singer Kelly Orr allegedly e-mailing various blogs, calling two separate Teen Hearts critics "nigger cunt." This could raise the stakes, suggesting that Teen Hearts is really more of an anything-goes, Anal Cunt-style satirical act. But it feels more like an over-the-top troll -- the use of the spectacularly offensive "nigger cunt" as a go-to insult seems especially suspicious -- so does this band represent the truest musical manifestation of Internet dickishness ever assembled? Or is it merely an oversensitive pop band with exotic taste in putdowns?

Orr claims the e-mails didn't come from him. Let's say they didn't. Maybe some guy hated Teen Hearts' music so much that he hacked into Orr's account. Here's an alternate scenario. Teen Hearts uploaded this video in 2008, and no one gave a fuck. Now they're getting a spike in publicity (entirely negative, but still) because of the controversy. So maybe it's intentional. It's like an extremely minor celebrity leaking her own grotesquely unflattering sex tape, and getting a bump in publicity proportional to her minuscule standing in the entertainment universe. Third option: Orr really does fire off "nigger cunt" whenever anything remotely negative appears online. If so, I guess we'll find out. --GD