Last year, I warned people What to Avoid at the South by Southwest music festival in Austin. Looking back, this was only marginally helpful, because while it pointed out the absolute worst acts, it did nothing to prevent people from encountering hundreds of mediocre bands, and it didn't suggest any quality alternatives. But this time I went ahead and listened to every single fucking band playing on Thursday, March 18, the first official night of music festivities for the majority of attendees, so I could provide a good-stuff itinerary in addition to the traditional doom march of crap.

I wasn't sure South by Southwest would have much to offer this year -- after all, it only has like 10 groups listed under "metal," and one of these is Attack Attack!, and who knows if they'll ever be the same after those personnel changes? But SXSW works best when you step outside your usual genre preferences, or when you go see your favorite genre as performed by musicians from other continents, the type of artists that won't be playing any more shows in America, at least this year. Given that even dubious-sounding genres can be much better executed elsewhere in the world, I didn't reject any genres from consideration outright -- well, except reggae. Apologies to the one reggae group listed, One Pin Short. (Feel free to check these guys out and tell me if I was wrong.) I gave everything else a chance.

A few questions before we start:

Q: I'm not even going to South by Southwest, why should I read this?
A: I'm not going either, but when going through the SXSW roster I noticed that a lot of bands i really like but will never have a chance to write about are playing, and I also found some awesome stuff I'd never heard before, and I wanted to share links to good bands for once in case anyone was interested. In addition to pointing out the shit, of course.

Q: I've already heard of every artist you listed, "good" and "bad," you behind-the-times asshole.
A: Sorry.

Q: Dude, you forgot to mention Sage Francis.
A: Shut up. 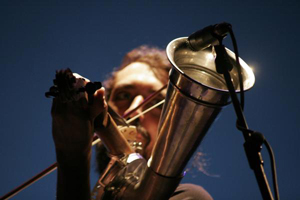 6:45 p.m. Bajofondo: From Argentina, this is a self-described "electronic tango" octet that features a Spanish-speaking female rapper and a guitarist who won a Grammy for the Brokeback Mountain score. You could pretty much fill every square on your Cultural Diversity Bingo card by seeing this band, before things even really get started.

7 p.m. Sharon van Etten: Minimalist folk singer/songwriter from Brooklyn. She plays fragile songs that could be ruined by people talking, but fortunately she's playing a church known for its respectful crowds and outstanding acoustics. If you're looking for pastoral ambience, but you're too grim and frostbitten to enter a church, you can see Hotel Hotel instead; they're an Austin-based band that plays post-punk instrumentals with a two-violin string section.

7 p.m. One of the most frustrating things about covering South by Southwest for an alternative weekly was that the suggested story angle was always "check out the local bands, and report how they were received." You've traveled to Texas, you're surrounded by an international assortment of intriguing, exotic acts you'll never have the opportunity to see again, and you're stuck sitting through a set you've seen 15 times or more. Scorpio Rising, from Austin, represents that experience, being the epitome of a "local bar band," though because everything happening in Austin is a hometown story, local reporters probably get to dodge that assignment. But here they are, a mediocre dance-rock group featuring middle-aged hobbyists with outsized stage personas, including a guitarist called "Wonderbred," who runs through a series of meticulously practiced rock-action poses. If you're at this set, and you're not close friends with Scorpio Rising, or even if you are, you've made the biggest possible mistake at this early juncture. Go see some fucking electronic tango; Scorpio Rising, or its regional equivalent, can definitely wait a week. 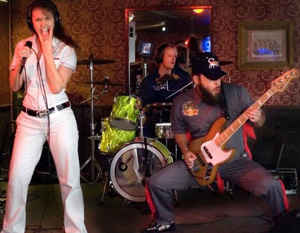 Other things to avoid in this time slot: The feeble, mushy-voiced Joshua James, whose bio promises he's capable of "foreboding doom-laden hard rock," suggesting the writer (and/or James) doesn't know what words mean. And at 7:30, there's New York's Terror Pigeon Dance Revolt, a nerdy-vocalled Casio-plinking goofball ensemble that fulfills the expectations conjured by the phrase "started as a dance theater project." If spectacle is much, much more important to you than musical quality, you might be amused, because costumes and props will likely be involved. Also, at least this group owns up to its in-your-face suckiness, with an awful song titled "In Your Face Suckiness."

8 p.m. Collections of Colonies of Bees might have the worst name at SXSW. Well, "Gringo Star" offends more because of the attempted cuteness, but CoCoBees' moniker is ungainly at best. Anyway, these Wisconsinites sustain the trance induced by Hotel Hotel, at least until they jar you from it with loud drums and actual electric guitars.

Also self-burdened with an off-putting name is King Dude, who's actually a bearded longhair playing cool Death in June-style gothic folk. (When he's not being King Dude, he plays guitar in a death metal band, always a plus.)

While skimming hundreds of these bios, I learned that as bad as some of these groups are at naming themselves, they're a million times worse at describing their own music, or finding someone competent to do so for them. Example: "JAIL WEDDINGS have taken on the burden of being the 10-member-deep spokespeople for a certain unique musical atmosphere - sometimes referred to as "death doo-wop" by those who in desperate need for a quick catch phrase for a band that has proved to be seductively inexplicable." Sweden's First Aid Kit came up with the most creative and accurate self-description: "What Gary Numan would sound like if he made folk music."

This Gong Myoung video incorporates someone power-drilling a pipe and another guy rhythmically thumping a watercooler jug, so this should be the perfect set for people who enjoy Stomp, Recycled Percussion, Blue Man Group and the like, but always wished those groups were somehow more Korean.

Resplandor, from Peru, plays shoegaze, loud, swirling shoegaze. You might not understand the lyrics, but at shoegaze shows, the vocals are the first thing to disappear into the fog, anyway, right before your ears start bleeding. 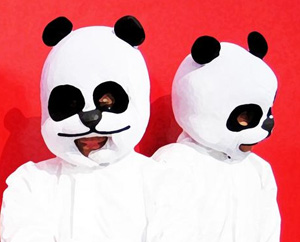 Anamanaguchi (8:45) stands out from the rest of the "8-bit dance" acts (one of this year's most ubiquitous genre descriptions, matched only by "Sun Ra-style cosmic jazz" and "psychedelic folk" and "rock the way it should be") with its bright, pixelated Wavves cover. However, the people most inclined to appreciate Wavves references probably won't see it, because they'll already be waiting, so bored, at the venue that will eventually feature The xx at 1 a.m.

8 p.m. As far as Funky Bunch rappers go, Milwaukee's Juiceboxxx could be worse, I guess. But he'll probably "get hype" and take off his shirt and run around and swing from whatever there is to swing on, dripping sweat on you like a gross sprinkler system, so skip this one unless you want to spend the rest of the night drenched in Juiceboxxx. For a cleaner yet still terrible time, you could watch Cady Groves (8:15), a wayyy sub-Miley-level twang-pop teen from Oklahoma, or Laura Jansen (8:30), who sounds like Kings of Leon as covered by an episode of Grey's Anatomy.