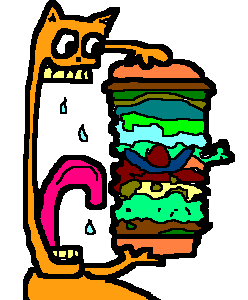 Arby's: Maybe it's just the one that I used to go to, but goddamn is that shit expensive for such a small amount of food. Two of their medium roast beefs cost enough to feed three people at most at another fast food place, and I can easily eat two mediums and still be hungry. Fuck, man. Fuck.

White Castle - Why would anyone eat this POS burgers? I used to like them because they were cheap, I even bought a crave case once for my friends... But then I realized, the food so bad and tiny it isn't even worth the little I am paying. Hell, if I paid $20 on 99c value menu Junior Bacon Cheese Burgers at Wendy's rather than a crave case with cheese, I am probably getting twice the amount of food, at a cheaper price to boot. Viva Wendy's

The only thing I know is for :science: reasons (that I'm not going to try to explain in detail because I'll sound like an idiot), completely cutting sugars and carbohydrates out of your diet can actually send some ridiculous percentage of cancers into remission. Something about how most cancer cells can only get energy from concentrated energy sources (sugars), as they're broken and can only absorb energy using a highly inefficient process. Cut sugar out and your normal cells can do fine but the cancer cells can't get energy.
I keep hearing about a lot of people who do some miracle crazy weird shit and are like MY CRYSTALS/POSITIVE PSIONIC POWERS/MAGIC WATER BOTTLES CURED CANCER, but when I'm privy to details, they ALWAYS also went on some nature diet that happened to lack carbohydrates completely.
Now before some asshole jumps down my throat, I know that my lack of a degree and hard evidence doesn't prove shit. I just find it interesting and if anyone knows more about this, I'd like to hear it. It keeps coming up enough that it sounds like it helps, at the very least.

The Duck Is Back! posted:

Two years ago, I lived half a block away from a little coffee shop. Now, while I'm not a morning coffee drinker, I usually eat a small breakfast where possible, so one morning I stopped in to peruse their pastry selection. I purchased a black-bottomed cupcake (rich, moist chocolate with a cream cheese center), smiled at the clerk, and left.
Next day, I notice it's the same lady working behind the counter. I say hi, ask her how she's doing, we chat for 15 seconds, I get my cupcake, I leave. Next day, two cupcakes, so I can have one for later, and since there's not much of a line I hang around for a few extra minutes and we talk.
By the end of the month I was seeing her four days a week, and while we never made friends outside of the shop, seeing her always brightened up my day and I hope that maybe I brightened up hers (she always smiled when she saw me come in and set my cupcake aside). I would order three cupcakes, she'd give me four, and charge me for two. When she left the coffee shop and hopefully moved on to better employment prospects, I was sad, since I'd lost my spontaneous-friend who made my mornings that much better.