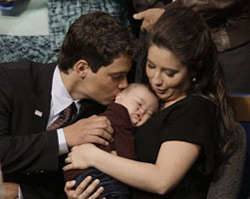 I hope I didn't catch retarded from kissing turpsFrito finally blurts out "Shes pregnant!" and you could just see mrs. Palin's face was like "ALREADY!?" what the fuck I bet she thought because at that point Troll was only like two weeks old. It came as a big time shock that Bristol was pregnant from me again and mrs. Palin asked how it happened and I was like "you know what they say those who know history is worth to repeat itself" and then I made the circle and finger poking gesture which means dicking. I could tell mrs. Palin knew what I meant but I couldn't put any moves on her right there in such an emotional moment and all.

Frito and Bristol and mrs. Palin were all crying and throwing estrogen around. Todd looked lactonic as fuck as usual and I was just feeling like I wanted to chew and eat glass for some reason. Like I could visualize putting a beer bottle sideways into my mouth and chewing it up and eating it. Then using some shit in my mind like the unused 97% of my brain potential dr. phil talks about to cybonically explode todd's head. Fuck yeah that would have ruled.

Anyway I sort of snapped out of it when Bristol was shaking me and said we gotta go and that was how we told MRs. Palin about Bristol being pregnant. Did we ever consider abortion? No, but we considered all sorts of accidents. Like I was always pressuring her to lift heavy shit and drink and I almost got her smoking cigarettes. I would practice wrestling moves on Bristol and during sex I would always get on top and then put my hands on her stomach and push as hard as I could.

That fucker Tripp never did get stillborn though so I guess I dropped the fucking ball on that shit. After it was too late I learned that if you get in a wreck in your jeep the seat belt can fuck up a baby so I got that shit for future reference. 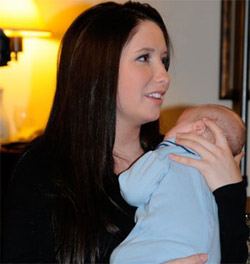 got to admit bristol is looking fine again titties still huge and now I got her running four days a week so her ass almost not fat pretty soon I am gonna have to make her pregnant againTelling my mom about the pregnancy was way easier. I just updated my myspace info from "I hate kids fuck 'em I hope they die" to "Bristol is pregnant this shit is gay as hell." My mom was like "yo you got a place we can cook???" and I was like "no bitch, you got my oxy I asked for like three months ago??" and she was like "I got half of it" and I was like "then I got half of your money" and she was like "I need it all to get the rest" and I was like "I'm not falling for that shit again."

And then it got quiet and she was like "I heard bristols pregnant again" and then I hung up on that bitch because I was in the drivethru at burger king and I just pulled up to the order box. Doped out bitch is not gonna fuck with my bacon double cheeseburgers.