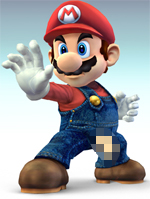 Oh god damnit mario! Unfortunately, the Goon Ckrew and I did not have much of an opportunity to harass this mindless MMO community since Kart Rider happened to be at the very end of an open beta. However, in my defense, I didn't see any kind of announcement or news on the Kart Rider website that indicated the game would actually adopt a pay to play format. To be fair I still don't know if they are going into a "pay to play" format but assumptions are all I need. So excuse me if this article is a bit low on content but we had all of three days to play this piece of crap.

The entire Mario Kart rip off didn't bother me (okay that is just a lie) until I realized that these jerks wanted actual money (maybe) at some point for a game that they really didn't create. Sure, they did the programming and slapped some cell shaded (the most effortless art style) graphics onto some lumpy models but a group of blind apes could accomplish that.

Speaking of apes, I believe the developers were going for a certain demographic that could sit in front of a computer and grind out race after race without complaining. Yes I know MMOs are about the grind (which contributes to their horrid nature) but what do I have to do before a company creates a fun way to grind? I am willing to do anything including sacrificing my first born child just to see a company create an innovative way to perform the same task over and over. Some companies go as far as relabeling grinding as "improving abilities" but its the same damn thing.

The community didn't particularly excite me either as (and I know this is going to be a shock to every one of you) hardly anyone spoke English. The Kart Rider forums were made up of  the same old crap that all of these garbage bin MMOs house and either consisted of real Asians or people pretending to be Asian by overusing stupid crap like "^_^" or "KAWII!!! o_O!!!" I wonder if anyone who lives in Asia sees this rape of their language and immediately wants to bust out some replica katana and go to town on these assholes. Relax my typical reader with many replica katanas; I certainly did not just make fun of people that have pretend swords laying around. Seriously guys, those intimidating pictures of an out of shape man-child holding a brittle sword and staring menacingly at the camera are top quality! Holy crap I think I just forgot what the hell I am supposed to be writing about. 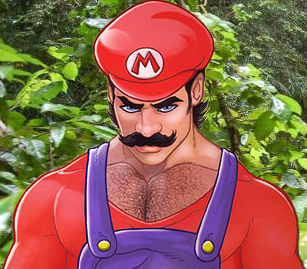 Here is gay mario.I could make an argument that the game had some kind of fun for the first race or so but only due to it's strong "ties" to Mario Kart. I spent my entire child hood up until, well... even now playing video games. I normally hated all racing games with the Mario Kart franchise as the only exception and thanks to Kart Rider, another part of my childhood is completely ruined. Thanks a lot you heartless pricks; I really hope you are proud of yourselves.

There really isn't must to say about Kart Rider other than regurgitate the fact it rips off Mario Kart (badly) and the developers are delusional enough to believe someone is going to fork over some cash to play it. I could go off topic again and talk about emotionally stunted man children but that is something for the real front page writers to do.

Though my time in the Kart Rider universe was short I managed to grab enough footage to throw together another video. However, since Kart Rider consists of extremely boring footage, I smashed some Mario Kart crap in there for comparison. JUST WATCH THE DAMN THING ALREADY.

I really had high hopes for this article and planned to gather a ton of material and I can't tell you how many Mario photoshops I made in anticipation for this article. So before you burst into a fit of nerd rage (with your katana) and then shortly thereafter forget that I had even written an article, it actually isn't my fault! However, since I love the six people that somehow make it through my articles every other week, I decided to make it up to them by including some hate mail I received recently.