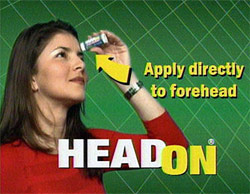 This is not going to be about HeadOn's annoying commercials. I think the Internet has adequately covered that subject matter. This list is about dumb medicine and few things could be conceptually dumber than HeadOn and its derivatives.

The idea behind HeadOn is that you skip the whole time-wasting bloodstream and apply it "directly to forehead" to cure headaches. There are a couple reasons why people don't go around slathering their faces in Aspercreme, namely all of the pesky bones and tissue in the head that are there to protect your brain from stupid chemicals being thrust into your face. Now, if you had a face ache, HeadOn might do the trick.

Well, maybe not. HeadOn and ActivOn and FirstOn and LiverOn and PancreaseOn and DickOn aren't actually pain-killing analgesics. According to the Better Business Bureau there is no evidence that HeadOn actually does anything other than get your skin greasy. The sticks are just wax and the active ingredients include an untested herbal remedy and a known carcinogen. Luckily, both ingredients are so diluted by the giant candle that the active ingredients are meaningless.

HeadOn's manufacturer has responded to inquiries concerning the medical applications of rubbing a candle laced with cancer on your face and they have revealed the science behind their product.

"It works through the nerves." - HeadOn Customer Service

I wonder if that's on their patent application. "A carcinogenic candle to rub on your face that works through the nerves." To do what? Whatever your imagination desires! 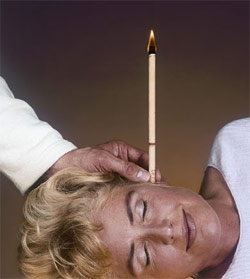 We move from a candle masquerading as a painkiller to a regular candle that can magically suction earwax and toxic residues out of your ear.

The process known as ear candling, or thermal-auricular therapy if you want to sound like and asshole who thinks jamming a burning cone of wax cloth in your ear is scientific, is a process in which a hollow conical candle is inserted into a person's ear and then lit. The heat from the burning candle will theoretically, and I use the term loosely, pull the ear wax and toxins out of the ear canal and deposit them inside the hollow cone.

Ear candling is one of many folk remedies for minor everyday problems in which the word "folk" has been substituted for the prefix "non." To use it in a sentence, "When marketed properly folk medicine is not folk-profit."

Needless to say, ear candling does not work as advertised by dumb new age hippies. The "ear wax and toxins" deposited inside the candle are just residue from the burning candle. If anything, those residues might contaminate your ear canal or even damage your eardrum.

The experience is described as relaxing by advocates of ear candling, but it would be difficult for me to relax knowing at any second a droplet of searing hot wax might fall into my ear and render me permanently deaf.

It is currently illegal for ear candle manufacturers to claim any medical benefits from their product.