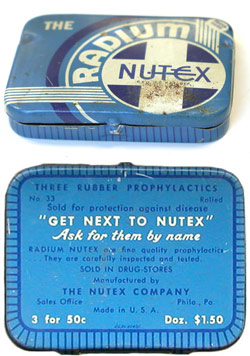 This has probably been going for as long as the scientific method has been around and it will probably continue until long after the world has been reduced to cinders by a malfunctioning Japanese massage robot.

Around the turn of the 20th Century great discoveries were being made about radioactive isotopes. The public loved the idea that there were these rocks that were shooting out weird invisible rays that could have measurable effects on the world around them. At the time, radium was exceedingly rare and expensive, so it entered usage as a word to enhance brands. This included many non-radioactive products in much the same way gold and platinum are used to imply wealth today.

The quacks seized on the idea of radiation being a good thing and the popularity of the radium concept and began to develop and market a wide variety of radioactive products.

The Museum of Quackery contains several radioactive items from this time period, including The Cosmos Bag (a radioactive rock in a bag you hold against aching joints) and radioactive bottled water called Radithor. All of these products were fraudulent, but most did not contain dangerous levels of radiation.

A notable exception is the Radium Ore Revigator. 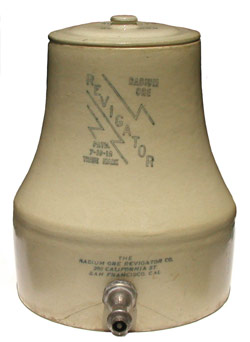 This clay crock was lined with porous rock containing radium. You would fill the crock with water overnight and by morning the water would be, according to the brochure, saturated with "this great health element - radio-activity!" Instructions on the side of the crock advised owners of the Revigator to "average six or more glasses daily."

One scientist cited by the Museum of Quackery claimed that a crock full of water left in the Revigator overnight would contain approximately six times the legal limit of radioactivity for well water.

Let's toast with our glasses full of radio-activity. Here's to your health! 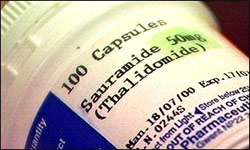 From quackery we move to the realm of medical science gone wrong.

Thalidomide was developed in the 1950s by the German firm Grunenthal. The company conducted virtually no testing of the drug before releasing samples to doctors and promoted it, somewhat lazily, as an anti-seizure medication. Thalidomide did nothing to stop seizures, but it did put patients in a deep sleep. Thalidomide then became a sedative and entered wide release throughout the world.

It was sold from 1955 to 1962 and during this time period millions of people enjoyed the deep sleeps the drug allowed. Unfortunately, while they were sleeping, pregnant mothers were also turning their babies into multi-limbed monstrosities. 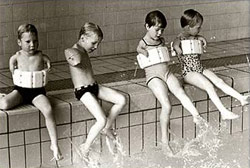 It turned out Thalidomide caused the now clichéd "flipper babies." The arms of children born to mothers who used thalidomide could be severely shortened and appeared almost flipper-like in shape. Toes and fingers often sprouted uselessly from the hips or the sides of hands and feet. During the time thalidomide was sold as a sedative approximately 10,000 deformed children were born as a result.

In 1962 thalidomide was taken off the market as the US and other countries enacted laws that required much more extensive testing. Some countries continued to sell the drug and similar drugs derived from the same ingredients. The incident is regarded as one of the worst failures of the FDA and other drug testing. On the plus side, at least Thalidomide didn't turn you permanently blue.

Thalidomide might have made it to the number one spot on the list, but it is being used again these days to treat certain types of cancer and eye problems. You just have to keep it away from pregnant women.