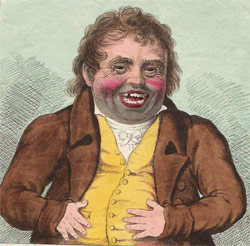 Every few years some university with too many grad students bumming around the lab decides to conduct a study of laughter's effect on physiology. The results are usually very dry, noting things like "laughter can temporarily reduce blood pressure," a tidbit that is only really useful to a ticklish person having a stroke. The media inevitably gets their hands on the research, skims over it, and churns out a series of fact-free feel-good articles with titles like, "Study Confirms Laughter is Best Medicine."

About five paragraphs in you'll get a one line quote from a scientist who says, "This is dumb and has no application." The writer will go merrily along their way ignoring what he said and chuckling about how, hyuck, laughter really IS the best medicine.

Laughter might be fun, but it's no laughing matter. Let me introduce you to a little side-effect of laughter known as Fatal Hilarity.

Perhaps the first and most famous example of fatal hilarity dates back to the Greek philosopher Chrysippus, who reportedly got his mule drunk on wine and then died laughing while watching it attempt to eat figs. This incident is a favorite of Dr. David Thorpe, but it's just one of many examples of laughter that kills. 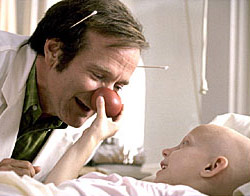 Ancient history is peppered with tales of kings and aristocrats dying from laughter. Presumably they were most likely to be afflicted because the miserable peasants in ancient times had nothing to laugh about, other than their cruel oppressors dying from laughter. You can put these tales down to a failure to comprehend medicine by our primitive forebears, but that does not explain modern examples of fatal hilarity.

In 1989 a healthcare worker from the Netherlands died laughing while watching A Fish Called Wanda. In 2003 a Thai ice cream salesman dreamed something so funny that he laughed for two straight minutes in his sleep before expiring next to his startled wife.

It turns out that laughter is not the best medicine, but rather a menace that we must avoid at all costs. I'm doing my part to save the world, how about you? The next time you try to cure your lymphoma with a trip to the Guffaw Warren, remember that your next laugh might just be your last. 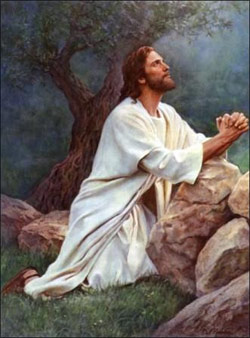 The healing power of the divine has long been considered to be the first and last resorts of those afflicted with serious illness. The intercessory power of prayer has often been cited as a contributing factor to cancer remission and recovery from life-threatening illness. It is natural for a person suffering from a life-threatening illness and their loved ones to call out in desperation to a supernatural being. Some choose the cold comfort of logic, but most choose to look to the nearest deity.

Everybody can agree there is nothing wrong witBZZZZZZZZZT!

It turns out, there's everything wrong with that. According to a study of 700 cardiac patients conducted in 2005, anonymous prayer had absolutely no measurable effect on the likelihood of patients to survive or avoid further complications. Listening to classical music and receiving "touch therapy" was more effective.

It gets worse. An even more extensive study conducted in 2006 indicated that knowledge of supporting prayers significantly decreased a person's chances. 1800 cardiac patients about to receive heart surgery were divided into three groups. The first group (A) was told they might be prayed for and they received prayers. A second group (B) was told they might be supported by prayer and they received no prayers. The third and final group (C) was told they were receiving prayer support and received prayers. Prayers were conducted by three Christian groups in the United States.

Prayer literally makes you more likely to die. These results are not completely conclusive. It could be that the total dick move of telling someone about to go into open heart surgery that you "might or might not" pray for them makes them so mad they refuse to die so that they can recover and flip you a mega bird.

The moral of the story is prayer may or may not work to save lives. It probably doesn't work. Alright, it could even be considered murder, but being a huge dick definitely works.