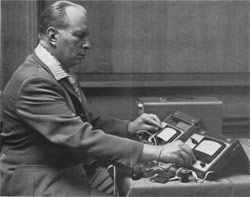 The Hubbard Electrometer, more commonly known as the E-meter, is a crude galvanometer used to measure electrical resistance in a human subject.

The device is essentially a useless version of a lie detector used by the Church of Scientology in a procedure called "auditing."

"In Scientology it has been discovered that mental energy is simply a finer, higher level of physical energy. The test of this is conclusive in that a thetan 'mocking up' (creating) mental image pictures and thrusting them into the body can increase the body mass and by casting them away again can decrease the body mass. This test has actually been made and an increase of as much as thirty pounds, actually measured on scales, has been added to, and subtracted from, a body by creating 'mental energy.' Energy is energy. Matter is condensed energy." 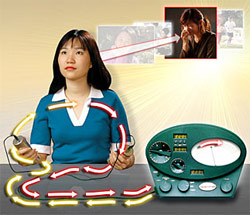 In other words, the device detects "mental image pictures" put in your body by alien "thetans" in response to questions being asked by the auditor.

Scientologists argue that the use of the E-meter and auditing allow them to cure mental and physical ailments resulting from negative "mental image pictures." When you have been fully purged of all of this vicious and redundant thetan pornography you will be declared "clear."

At this point you have to keep being audited and paying them all sorts of money, but you're better. Your mental weight has been reduced. You start grinding levels in their pay-to-play lunatic MMO and you're free to go on Oprah, scream, shoot lightning, or condemn the glib. 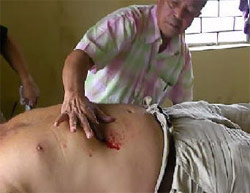 The most blatant awful cure being practiced on the list is what is known as psychic surgery.

Psychic surgery is a trick procedure in which a practitioner places his or her hands on a patient and pretends to extract blood and unhealthy tissue without creating an incision. The procedures are often quite gory and involve hidden supplies of blood and animal entrails used to impress the patient and witnesses.

Psychic surgery is uncommon in the first world, but people in developing countries without easy access to affordable medical care seek out the assistance of quasi-religious practitioners of this technique in the hopes of finding a cure. 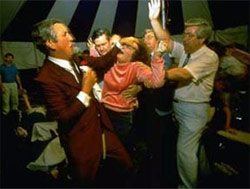 Psychic surgery scams resemble the popular faith healing practices of evangelical Christians in the United States. Both rely on superstition and performance to create the impression that supernatural forces are at work eliminating disease and infection. Both can seem to work for the people who believe in them.

Cancer organizations around the world have condemned psychic surgery because it might prevent a person with treatable cancer from seeking out real medical help. Those with inoperable cancer might still be interested, as it turns out no cancer is psychically inoperable.

I have been assured of this by Dr. Kali Mut-mut, practitioner of psychic surgery and Bangladesh General Psychic Hospital's resident nine-tongue umbra bladeologist.