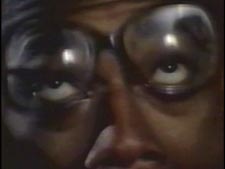 It's hard to tell from this still picture, but believe me, those glasses wobble as faggily as faggily can be.

Back at the house, the Flannel Killer kills one of the girls with a knife to the face. No, I don't know how the girl or the killer got back to the house so fast, or even why they would go back to the house. Out in the woods, Annoying White Girl manages to trip while standing perfectly still. Once she gets up, she also trips every other step after that. Eventually the Flannel Killer appears in the distance and starts to pursue her.

A guy and a girl find a car in the middle of the woods. Thus, they shall be henceforth known as Car Guy and Car Girl. In another example of Mfume's fresh, innovative, and obnoxious writing, they argue about whether or not the car is actually a car. Then they argue about whether or not Car Guy has the right to raise his voice to Car Girl. Needless to say, the dialogue is full of "Who you think you talking to's" and "Oh no you did not's." Neither of them so much as tries to get into the car, let alone look to see if there's a key in the ignition. I swear, I don't know how this movie didn't sweep the Oscars. Oh wait, yes I do. Because the universe is essentially good. Dancey Guy and Girl In Blue (who is wearing blue) run though the forest, tripping frequently, despite running on flat ground with nothing to trip them. I suppose I could explain that by saying that they're expecting to have all sorts of sticks and roots in their way to trip them that they are so surprised to have nothing in their way that they fall anyway. Of course, I'm an asshole. 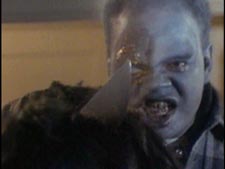 He's not really a bad guy, he's just looking for the guy who threw that egg at his face.

The Flannel Killer lurks around the house until he happens upon a chair in the middle of an empty room. Yup, just a chair with a big lumpy sheet on it. Nothing under the sheet, nothing to see here, move along. And that's just what he does. Malcolm X's clever ruse is a success! Unfortunately, Girl In Blue had to go and hide in a random closet with a skeleton in it. I have no idea where that skeleton came from, but there it is. I mean, there isn't even a rationale for that one. The Girl In Blue screams and runs out of the closet, with the Flannel Killer right behind her. Malcolm X leaps to her aid, stopping her and trying to calm her down. Now let's review the situation: the Girl In Blue is running from the killer, who is hot on her heels, and Malcolm X thinks he's helping by stopping her from running away. Uh, hello? Dipshit? The killer is all of two feet away, here. Luckily, the killer trips and knocks himself out for a ridiculously long time, allowing Malcolm X and Blue Girl to escape. We cut to Dancey Guy who is now with Blue Girl... somehow. He shoots at a closed door, which Flannel Killer is presumably behind. The Flannel Killer just keeps coming, which isn't surprising, considering that the bullets barely nicked the door, so I doubt they did much damage to the zombie behind it. Dancey Guy helps Blue Girl escape through a basement window, but stays behind to shoot a the Flannel Killer a few more times.

Malcolm X, and Blue Girl meet up with Car Girl and Car Guy in the woods. Dancey Guy and some other girl altogether (now known as Other Girl) show up a few minutes later. They finally pile into the car. Amazingly enough, it doesn't start. Car Guy and Dancey Guy check under the hood and find that it's missing a battery. Luckily, Car Guy knows where one is. That's right, he knows where there is a car battery in the middle of the woods. I'd love this movie if I didn't hate it so very, very much. Car Guy goes off in search of the legendary Car Battery Tree or something like that, and the rest of them scatter a moment later when the Flannel Killer shows up. Maybe if Car Guy and Girl had tried starting the car earlier, they could have all saved themselves that time, trouble, and run in with the bad guy, hmm? We follow the Car Guy, who talks to himself and is also now suddenly Jamaican. I'm not surprised, though. When I get nervous, I become Danish. Oh wait, no I don't. That's just stupid. 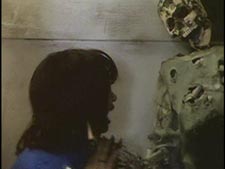 The rest of the gang run through the woods. As they take a sharp corner around a tree, Dancey Guy grabs hold and tries to swing around it like a stripper pole, kicking Malcolm X in the back in the process. You couldn't just turn, could you, Dancey Guy? No, you have to dance like a retard. Having nothing else to do, we fade to black. Normally fades are used to transition between different characters in different locations. Not here! Here it's used to transition to precisely the same characters, but about ten feet from where they were a minute ago. Now they seem to be on some sort of strange, alien landscape. Oh wait, no, they're at the back of the house. It's just an incredibly shitty shot. Seriously, if you can point a camera at a house and make it completely unrecognizable, you shouldn't be making movies. They all go back into the house. Other Girl, knowing that her friends are right behind her, hides around a corner with a pitchfork she finds and immediately stabs the first person she sees with it. Of course, that's Dancey Guy. He doesn't get hurt, unfortunately, just knocked down.

Meanwhile, Car Guy actually finds a car battery sitting on the ground in the middle of the woods. Reality as I know it is now a worse place to be.

The Flannel Killer comes back to the house? How does he keep tracking them down? Oh, right, because they always run back to the same place. The gang gathers on the staircase. They're all armed with guns, pitchforks, bats, two by fours, et cetera, but no one will make the first move to attack the killer. The Flannel Killer stops in his tracks, reaches into his pocket, pulls out a small object and tosses it to Dancey Guy. I have no idea what the object is, as the camera doesn't get close enough and everyone talks over each other, so if one of them says it, it's lost. In any case, it's clear from the gentle toss and the apparently harmless nature of the object that this is a gesture of friendship. The Flannel Killer wants the violence to stop. Blue Girl responds in kind by taking the gun from Dancey Guy and blowing the Flannel Killer away. Then Other Girl jams the pitchfork in his gut. The Flannel Killer thrashes about, flailing at the pitchfork. "Is he dead," one of the girls shrieks. Well, gee, he's fucking moving, isn't he? Goddamn, every one of them deserves to die. Instead, they all run out the back door. Then Dancey Guy runs back in to shoot the Flannel Killer a few more times. Terrific. Once again, we fade to black.