Suddenly, Steve gets a call from the lab people who want his help catching the terrorist Miguel! Miguel himself, meanwhile, has concocted a brilliant disguise in which he is hiding out in a federal prison impersonating a warden. He has the scientist with him and is holding him prisoner so that the scientist can manufacture some sort of crazy drug that makes people age very quickly but that unfortunately can't make the movie end any faster. Steve is hired by some crazy organization whose name is never made clear to find Miguel and bring him to justice before he can dump the aging drug on anyone. This is all made much worse when Miguel demands ONE BILLION DOLLARS and threatens that if he does not receive it that he will dump the old stuff on a big city. If only Captain America were there!

The people who hired the ever-competent Steve notice that Miguel will need a shipment of a certain chemical, so they send Steve down to the docks to make sure that it is not being smuggled. At this point Steve takes it upon himself to engage in what has to be one of the worst fights in movie history, ever. By "worst," I mean he rides in as Captain America and for some reason deems it necessary to ride through a pile of boxes with his motorcycle. Just drives on through them. He then proceeds to take out one minority after the other using one of many convoluted methods of fighting, the best of which being lifting up an entire forklift by the prongs which causes a fat man to tumble out. GO STEVE!!

Steve discovers the chemical he is looking for in the boxes and shows it to the lab people. He does not, however, take it out of the boxes or move the boxes, so the bad guys still get the chemical they need to make the aging drug. NICE ONE, STEVE! Steve is the best super hero ever. He gets into his hideous giant van and follows the bad guys to their hide-out. But instead of going in and kicking ass super hero-style, he just stays outside all night. In the morning, the bad guys come outside and find him painting a picture of his cat on their front lawn. They are not very happy at Steve's presence or his very poor painting, so they cordially invite him to leave town or else. Steve, being the stalwart and resolute hero that he is, declines. They become a wee bit upset and grab a paintbrush from him. They paint a pair of glasses on the cat Steve has so painstakingly worked on and say, "There, now he can see. And we can easily fit you with the same prescription!" Steve replies, "I suddenly have 20/20 vision!" Way to be a wuss, Steve. Your brilliant plan code-named"Operation Camp Out on the Bad Guys' Lawn while Painting my Cat" didn't work out so well. 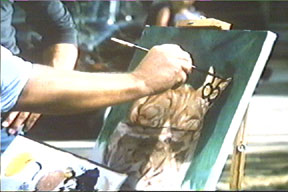 The goons demonstrate their artistic skill, prescribe glasses, and show that Steve is a moron all at the same time.

Steve gets in his stylin' van and wanders aimlessly throughout the town. He tries talking to people, saying that he needs to find a vet for his cat, but they all reply that he should leave and go to Greenwood, another town up the road. He goes to the local vet's office and meets a mother and son who also tell him to go to Greenwood. In a very disturbing scene, Steve seems to hit on the kid, asking him if he'd take him horsebackriding. The mother is not disturbed at the fact that a strange man just asked her son to take him horsebackriding but she is disturbed at the fact that if he got molested he wouldn't be able to do his chores around the house. She is upset and she drags the boy away, even though there was clearly the beginnings of a beautiful relationship between Steve and the boy.

Steve takes his cat to the local vet who seems eerily incompetent. He then heads out to the woman's farm and asks her if she knows of any houses for sale because he wants to buy one. He also apologizes for being such a raving pedophile at the vet clinic and asks why the town is so full of mean people. The lady just snaps at him to leave town and go to Greenwood. He unfortunately doesn't listen because on his way back to town he gets roughed up by some goons who are mad that he hasn't left yet. In this fascinating scene Steve destroys part of a person's house for seemingly no reason. GO STEVE!

Meanwhile, at the lab, the government people have confirmed that Miguel has the super fast aging drug of aging and oldness. They test the drug on a baby bobcat and are shocked to see it grow into an adult very quickly! Where oh where is Captain America?

The farm lady, named Helen, by the way, appears in town and notices that Steve has gotten into trouble with some friendly neighborhood thugs. They go back to the farm where Steve has more innuendo-laden conversations with the little boy. There are also a couple of scenes in which the microphones that the actors wore were very visible. Yay! Unfortunately, this idyllic happiness cannot continue, for Steve is arrested and thrown into jail on assault and battery charges. Luckily, because he is the ingenious Captain America, he manages to escape by bending the bars of his cell.