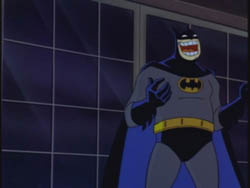 Your dear old daddy had a little visitor today. I was led out in handcuffs to an interview room split in half by a wall of bulletproof glass, and who should be on the other side but Bruce Wayne? Jeremiah, I'll admit that I didn't think I knew much about the guy outside of him being Batman's boyfriend, because why else would Batman show up in a robe all those times I tried to vandalize Wayne's house in the middle of the night?

Bruce rapped on the glass and said he had something to show me. I was game, if only to get away from that dreadful David Murstead and his interminable matress chat that kept me bored out of my mind for the past three days. Honestly, if that guy knew as much about opera as he did about finger painting with ejaculate, maybe we could have a conversation that wouldn't make me want to kill myself!

What Bruce did next shocked me. He slipped on that trademark cape and cowl, and it was then the realization that he was Batman hit me like the ton of bricks I dropped on that foreman during The Case of Masonry Madness. "Bruce Wayne is Batman!!!" This is what I shouted for all to hear. I wanted his secret out for the world to know! I would not die in vain if the world knew what everyone suspected ever since Bruce Wayne showed up to that Halloween party drunk and dressed as Batman.

Bruce knocked on the glass, holding up a small poster. Here is what the top said:

Here is what the bottom said:

Batman then presented against the glass the last pressed ham these eyes will probably ever see. Jeremiah, if the outside world already knows that Batman is Bruce Wayne, can you at least try to ruin his reputation by spreading the word that Batman is a complete dick? Toodles. 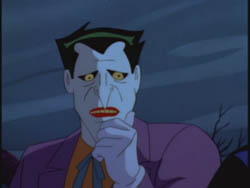 Well, Jeremiah, it looks like your dear Aunt Harley is no more. Honestly, I thought the syphilis in her brain would have killed her first, but it looks like the boys in blue wanted to beat sweet lady VD to the punch.

Harley arrived today with a present for her sweet Mr. J, a twinkle in her eye, and a sparkle (as well as a grain of rice) in the small bit of drool accumulating on the side of her cheek. When she got to the interview room, she was brandishing a small revolver that had a nail file hidden inside. Before I could explain to her that the revolver was actually more suspicious than the object hidden within, she was thrown out of her chair by prison guards and--well, let's say if they didn't know she had a heart murmur before, they certainly do now! If those tasers can make a young lady's ticker audibly explode in her chest, I sure would like to see what they'd do to a baked potato. French fries? More like French Dies! Listen, Jeremiah, I know that was bad, but your daddy's under a lot of stress right now and he can't sound like The Cryptkeeper just to make you feel better.

After they hauled Harley's sizzling corpse out of the room, Bruce Wayne showed up and confirmed what I was thinking all along. "Who needs Batman when we've got these?" I'll tell ya, Jeremy; you know those days when a guy could use a giant robot clown to steal diamonds without worrying about getting his shit all electrocuted? They're over now. 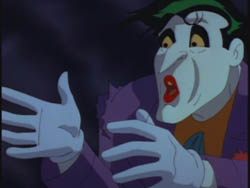 I just got off the phone with the ACLU and it looks like I'm completely screwed. A few days ago, I had the realization that all of the squawking I've ever done to Batman has been under duress. Jeremiah, I can't even count the number of times he's held me by one leg off of a building or over a pit of lava, demanding to know what wire to cut or which dog in the dog show is full of explosives or something like that. In my book, that's torture--and here I thought torture didn't fly in America. Seems like those jerks at the ALCU think that batmen don't fall under the Geneva Convention, and that no one in their right mind would convict Batman because "he's so cool." Maybe they'd realize I had less than eight hours left to live if they stopped interrupting me with demands for multiple Batman autographs! 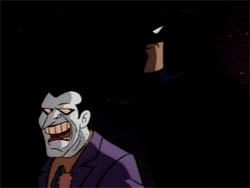 Jeremiah, even in this time of sadness, I am not without hope. Your daddy has taken a book out from the library written by Sylvia Browne (Who looks like she wears more makeup than yours truly!), and I have to say that, even though I'm condemned to die, I'm somewhat comforted. It says here that, in Heaven, I'll be given a studio apartment and a civil service job, and, after a 90-day period of probation, I'll even get a weekend pass to pet heaven! I'll finally get a chance to visit all those hyenas I've owned who kept getting hit by city buses! And Jeremy, watch that mailbox, because when I visit Heaven's post office, I'll see if I can't send you a novelty postcard or two.

Well, Jeremiah, I guess this is goodbye. See if your Nana can't take you to Hebrew School from now on, and try to find someone to feed you when necessary. And remember, you can always recant on your death bed.

Yours in Christ,
The Joker