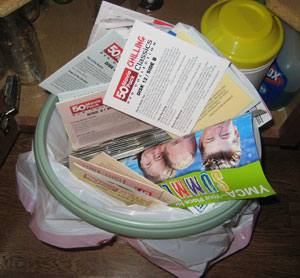 Garbage Day: "Guess what I found in the trash can?"

Garbage Day: "Only if your dignity manifests itself in a shitload of horrible DVDs that we can review in rapid succession at great cost to our sanity and hygiene!"

Garbage Day: "Okay, but, um, do you want to watch the movies anyway?"

Lowtax: "Why not? It is fun to be retarded! Oh no! Dignity, where are you going? Come back!"

Garbage Day: A woman rubs her stomach for ten minutes in front of a magic mirror that somehow makes this gesture sexually satisfying to her but fails to make it less boring for the viewer or less traumatizing for the child hearing about it. IMPORTANT MESSAGE TO THE WRITERS OF DEADTIME STORIES: Children have a difficult time going to sleep if you sit on their bed and talk in detail about bloody corpse zombies, women groping themselves, and old men "fancying a bit of bondage" with vixen witches. Just use chloroform next time, moron.

Lowtax: My favorite part was when Uncle Mike yelled at his nephew for no rational reason. Either that or when Mike sensed his nephew wasn't satisfied with Mike's "witches seduce and torture an AARP member" story and responded by trashing the kid's room.

Garbage Day: I recently became an uncle. Until watching Deadtime Stories, I had no idea how much impact I could have on my nephew's life. Apparently, I can inflict a lifetime's worth of mental scars in a single night! 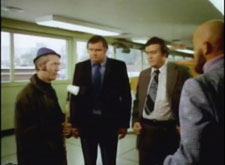 Lowtax: Blurry, dark film about several obese blobs trying to track down a skinnier blob responsible for doing something I couldn't understand to somebody I couldn't see. Brace yourselves for the surprise ending, where a Rorschach test inkblot collides with a shape-shifting brown wad of what appears to be mumbling liquid hay.

Garbage Day: A sword-swallowing retard, a man who married a toilet, and a dopey slob who ran over a dog seem to be the likely suspects in a string of drive-in stabbings. Twin doughboy detectives wisely announce over a loudspeaker, "don't panic, there is a murderer loose in the theater." The crazed butcher then slays the director, resulting in obscure, unfocused camerawork from his mangled corpse.