The House of the Dead

Garbage Day: Morals of the other episodes in this anthology:

This movie was inexplicably retitled Alien Zone, which makes perfect sense considering there's absolutely no mention of aliens (or zones) anywhere in the film.

Lowtax: Now, that's not true. I recall seeing at least 23 distinct zones in this movie.

Garbage Day: I think you're confusing "zones" with "boring parts."

The Demons of Ludlow 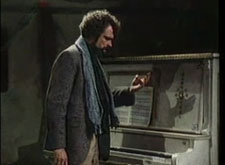 Lowtax: Inbred yokel rednecks celebrate the bicentennial by receiving a haunted piano full of ghosts from various time periods, all of which hate inbred yokel rednecks and bicentennials. Evil piano-ghosts include such horrifying visions as swordfighters, cowboys, Quakers, and a mopey girl who wears a bonnet. Some woman defeats the evil piano by watching her husband defeat it, then gets hit by a car due to the evil piano's force field. What a dumbass, everybody knows evil redneck pianos have the worst force fields.

Garbage Day: The Lessons of Ludlow: If you're a backwater town, never accept an "old harmonium" as a gift, because it will turn your shitty town into a homoerotic Renaissance festival. Also, if you're a mentally unstable teenager, never falsely accuse a doll named Abigail of laughing at you, because it will summon sleazy Victorians to stage a food fight before molesting and dismembering you. And food fights can really wreck your dining room.

Lowtax: I played a haunted piano once at the YMCA while my parents were playing indoor volleyball.

Lowtax: A ghost who looked just like my father told me to stop and then drove me home, and he's been living with my mom ever since. 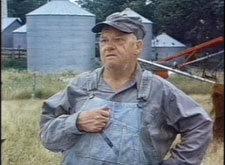 Lowtax: Dumb white people turn a funeral home into a hotel for reasons that probably seemed valid at the time. Some girl's grandmother is possessed by the specter of bad home renovation ideas, causing her to break open some mason jars of pickled preserves. A cinematic gem courtesy of the Canadian Film Development Corporation, and yet another reason to avoid funeral homes. And Canada.

Garbage Day: A teenage girl is terrified of a stray cat, but thinks nothing of hitching a ride with a strange guy in a windowless conversion van. This turns out to be a harmless decision, as the real danger comes later when she's terrorized by the rotting corpse of her long-dead grandfather, as ventriloquized by her dumpy grandma.