Lowtax: Retarded dancers compete to win $1 million in a horrible competition-of-death reality show sponsored by three old people coaxed out of a retirement home. The evil elderly put fake sharks in a swimming pool, and giant spiders in bowls of soup. This is considered "horrifying" by the various people who witness it. Eventually the game is declared "over" and some plot twist is revealed, but I'll be damned if I could decipher it. Something about retired auto workers turning into popsicles and putting tiny devil heads in your bedsheets, I think.

Garbage Day: Elderly geniuses summon the technical prowess to glue alien monster heads on sticks and ram them through a mattress. Realizing that they've accomplished their ultimate goal in life, they freeze themselves to death in a broken reverse sauna. Then the actors who depict the old people accidentally awaken and start moving before the credits roll. Whoever wrote the title must've accidentally placed a "C" in it. 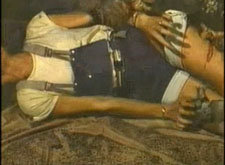 Lowtax: Nazi zombie sex ghosts chew on a British archeologist until he stops moving and the camera loses focus. This action directly results in more British archeologists traveling to the aforementioned Oasis of the Zombies, because I guess they archeologized everything else in Britain. The climax occurs during a peak moment of camera overexposure, perhaps inferring the Oasis of the Zombies was secretly located on an exploding star.

Lowtax: Not to knock this film, but it really pales in comparison to Isthmus of the Zombies.

Garbage Day: I just read George A. Romero has started production on Olive Garden of the Dead. It might not take place in an oasis or feature Nazis, but I hear it contains a groundbreaking message about capitalism! 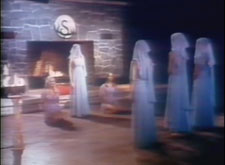 Lowtax: A group of boring girls hang out in a house and die. "Sisters of Dying" must not have sounded that appealing.

Garbage Day: A sorority girl dies during a Russian Roulette initiation. The rest of them survive for seven years (off-camera), then join her in hell. A young man also dies, striking a chord for equality by becoming a Sister.

Lowtax: Sisters of sitting in a house until they die.

The Legend of Bigfoot 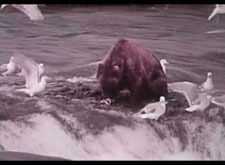 Lowtax: Some jerk in the woods is attempting to do something with Bigfoot, but is repeatedly interrupted by a bunch of nature and the world's most boring voiceovers. The legend of Bigfoot apparently consists of a gigantic storeroom full of squirrel videos. I guess that could be considered a twist ending if you're suffering from fatal retardedness.

Garbage Day: "Where do you begin?" the narrator asks in a seductive whisper. Apparently, you begin at the dawn of time, using the world's oldest stock footage, and proceed at the speed of human evolution. Where do you end? We answered that question in roughly 11 minutes.

We are horrible monsters and pray for death.