Track of the Moon Beast

Lowtax: A motorcycle rider is struck in the head with a magic space rock, causing him to transform into an evil farting lizard. He kills people and falls down a lot, and is eventually stopped by Native Americans who formed a coalition against magic space rocks.

Garbage Day: Native Americans host a stick-figure slide show depicting an ancient reptile who can't be killed with arrows. The moron who watched this presentation soon encounters the current incarnation of the ancient reptile, and he promptly attempts to kill it with... get ready... arrows! Perhaps you can guess what happens next. I sure can't, because I don't remember. I'm sure it was something boring as hell. 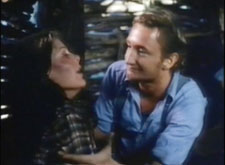 Lowtax: Some curly-headed guy discusses emotions with a bunch of hippies before leaving college to sleep in the woods with his girlfriend and also a bear. Two one-dimensional Deliverance rip-offs come by their camp, heckle their swimming skills, and ultimately rape his girlfriend. Robert Englund catches news of this and shows up to hang out and do absolutely nothing for the remainder of the film. Somebody's pants get stabbed, and they celebrate by going swimming.

Garbage Day: Robert Englund was fated to become Freddy Krueger after appearing in a movie called Slashed Dreams in 1975. This is the only function that this film and its related-to-nothing title serve. The aforementioned pants are the only thing slashed in this film, except possibly its budget during production. The girlfriend does get slapped, though. "Slapped Dreams"!

Garbage Day: I really enjoyed him in that movie where the evil laundry-folding machine killed people.

Lowtax: I liked him even better in the sequel to that movie, where the evil computer virus killed people with fire axes. 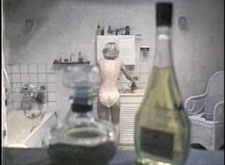 Lowtax: Some guy stabs British people while the cameraman zooms in on rocks and other useless parts of scenery. This helps establish the movie's central theme, "our cameraman knows how to zoom." The stabbing man briefly switches things up a bit by suffocating another Brit to death by placing a bag over his head, to which I screamed "now that's where bags belong!" Nobody laughed so I repeated the line again only I did it a bit louder. See, I was insinuating British people are ugly, and that's why it's funny. Also I know how to zoom.

Garbage Day: A creepy guy sniffs a pillow in a dead teenage girl's room and remarks "this must look like witchcraft to you, but sometimes I get feelings." Apparently he didn't inhale deeply enough to get an accurate psychic reading, because he's unable to foresee his death at the hands of "The Demon," who isn't even a demon at all. I guess "The Guy" didn't look quite as catchy on VHS box art. 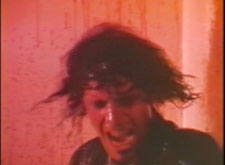 Lowtax: The film begins by displaying the message, "THIS FILM SHOULD BE PLAYED LOUD." Maybe you could also light some plastic and Styrofoam on fire while watching it, thereby irritating yet another sense. Although it has a promising name, Driller Killer turns out to be yet another dull art film mess about art or life or something else stupid. A repulsive painter with stomach problems kills hippies, bums, and punk rockers.

Garbage Day: A whiny woman makes a shitty artist drill holes in her doorway, driving him so insane with her incessant demands that he starts using his drill on people. Also, some terrible party jerk makes weird noises.