Lowtax: Eco-horror film about an evil land developer who wants to develop some land, which he obviously should not do because that is wrong. Dumb campers are picked off by a werewolf caveman, who people somehow confuse with a bear. The lesson to be learned here is that living in the woods makes you retarded, and we should encourage land developers to develop the shit out of any place containing a single tree.

Garbage Day: A feral caveman child kisses a mouse, chases and mauls a moped-joyriding fat kid, becomes outraged at the sight of wristwatches, and impales his long-estranged father with a swinging, spike-covered log. Meanwhile, slap-happy teens taunt the elderly, and the phrase "good luck on your safari" is muttered.

Lowtax: I like how the movie reveals the werewolf-caveman creature is actually the park director's son who was accidentally left in the woods years ago. Maybe trees absorb human intelligence and convert it into breadfruit.

Garbage Day: Previous to arriving in the park, these people were nuclear scientists and chemical engineers. Then they entered the camp grounds, and suddenly they required a non-profit organization to help them chew their food. 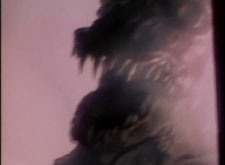 Lowtax: I'm having a hard time recalling the original purpose behind Dr. Asshole's wacky experiment. Was he just injecting stuff for the hell of it?

Garbage Day: Maybe he was trying to grow a prehensile tail, so he could simultaneously trip multiple geezers. 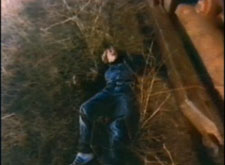 Lowtax: Some kid runs over his farmer father with a thresher, which then accidentally rolls over his own hand and results in him getting a prosthetic replacement appendage and prosthetic replacement father. He kills the new father and flees the area once he realizes there are no more fathers to kill, eventually shacking up with a prostitute and going into a church to die.

Garbage Day: A sniveling mama's boy with a hook for a hand racks up the world's wimpiest body count, slaying a freakishly tame dog, an elderly woman with a walker (after a prolonged struggle), a squealing sissy sailor, an art painting, and his own pre-pubescent hand. It's like "Buster Bluth: Serial Killer!"

Lowtax: This would've never happened if those fat cats in Washington would've provided this poor boy with a sufficient supply of fathers.