Lowtax: A hobo breaks some NASA equipment containing a space virus, causing him to run away from a train and get shot in the leg. Then nothing happens for an hour, which is abruptly interrupted by a man's head oozing jelly for reasons I'm assuming are directly related to the whole hobo (alpha) incident. Also there's some old guy in a room with a bunch of maps and blinking lights, but he appears to have wandered into there by accident, and isn't really sure what to do with all the buttons.

Garbage Day: Some doctors use science to create a virus that melts people's faces. At the end, someone shouts "I haven't been infected, I'm alive!," and he's immediately shot, because no one likes a gloater.

Lowtax: The only reason they named this movie The Alpha Incident was so they'd have better placement at the video store, in the coveted section next to the gumball machine and tape head cleaner. 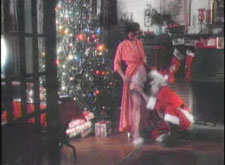 Lowtax: A crazy repressed homosexual hates Christmas because some guy in a Santa suit tried to give oral to his mother. He retaliates by growing old, entertaining Jewish families, and redistributing toys. Eventually a lynch mob forms and chases him around some alleyways, causing him to get into a van and fly into the moon.

Garbage Day: A pleasant fellow in a Santa suit delivers toys to the hospital, which fails to warm the hearts of the blood-thirsty Scrooges that threaten to rip out his guts in front of children.

Lowtax: The description of this movie claims the dude went berserk when he discovered Santa Claus wasn't real. Is that a common reaction?

Garbage Day: I think it would be far more disturbing to discover Santa Claus was real, right as he was about to stick his immortal tongue in your mom's vagina.

War of the Robots 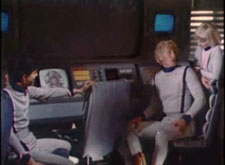 Lowtax: The best part of this movie was the credits, introducing us to such names as "Vernon Vernons" and "SOL SICKLE AND SON." The worst part of this movie was everything else, which revolves around a bunch of people dressed like Sub-Zero sitting in a room and talking to fat-faced migrant workers. Alien robots kidnap their scientist and force him to build an intergalactic slot machine, so the Sub-Zeroes team up with vagina-eyed bald men to stop them. Will their plan work? Nobody will ever know, since it's impossible for inhabitants of any known solar system to sit through this entire movie without fleeing or dying.

Lowtax: Can it really be considered a "war" if there's only 20 participants involved?

Garbage Day: And none of them are robots.