BIDEN SEACREST: Wow, that's a shame that a great competitor had to leave so soon. Especially because I really admire and love pregnant women's tits. They are truly bomb-ass titties. And I know from a titty. (looks down at a cue card) Our next guest is Tyrone Blackman, 27, under suspicion of raping two white students in their college dormitory. Tyrone received a blow to the face, seven stitches and a broken nose, total cost... $3,500, which he cannot pay. 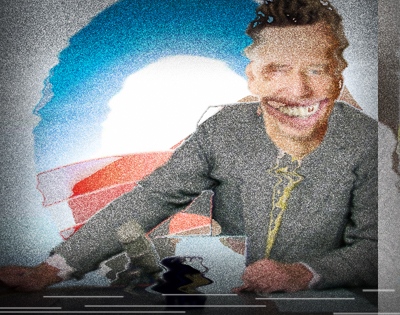 AL-SOTOMAYOR: Does your nose still hurt?

OBAMA: Blow that shit up, dawg.

Obama, Tyrone and the cowled Emperor figure mime making a terrorist fist bump at each other, and all let out a "Bwooossshhhhh!" noise while splaying their fingers upward.

TYRONE: What the fuck, now?

OBAMA: What were you doin' out there got you into those girls dormitories?

TYRONE: Shit, canvassing the 11th District on the DL, just like those Census motherfuckers told me.

OBAMA: And you got two white girls?

OBAMA: Do you remember the training and orientation video?

OBAMA: Do you remember what it said?

TYRONE: "Anytime we got extra strange on hand, we gotta kick that shit back up to the top."

Tyrone walks out unescorted. He shoots a jet of spit out his front teeth just before passing out of the light.