Credits fade out. The sound of a triumphal march fades in. A static 45º down-angle shot reveals a huge black hall, at the end of which emerges a small rectangle of light. The light winks out. Music dies down, eventually replaced with the sounds of boots on stone. Three figures come into view. Two are black men in the uniform of United Nations peacekeeping forces, although their blue helmets are altered with the addition of an acorn emblem. Between them they drag a woman in a shapeless dress. She is wearing a burlap hood. They walk her into a pool of light and pull the hood off her.

She gasps as she lifts her head into the light. Saucer-sized pupils contract to pinpricks. She tries to shield her face with her forearm. Her eyes lock on something high above her and widen. Camera spins clockwise away to reveal what she sees. A triad of narrow rectangles of scarlet cloth stretch to the ceiling against a polished granite wall. On the middle cloth, anchored two-thirds of the way up, is a giant caduceus, the symbol of medicine, except the twin serpents are not coiled around a scepter. Instead they wrap around the body of The Christ. One buries its jaw in His side. Gasping in horror, the woman's eyes alight on the figure's face, and she recognizes the unmistakable visage of George Soros.

The stage rises six feet above the floor on which the woman stands. Biden sweeps his hand to stage right to indicate the panel. Three figures sit at a single table. On the left is Barack Hussein Obama, seated before an enormous watermelon. In the middle sits a hermaphroditic person who looks like Horatio Sanz or an Arab Babe Ruth. The hermaphrodite wears a diaphanous white dishdasha that reveals the contours of both her pendulous breasts and swollen glans. At the right sits a figure cowled in black, reminiscent of the Emperor from Star Wars. 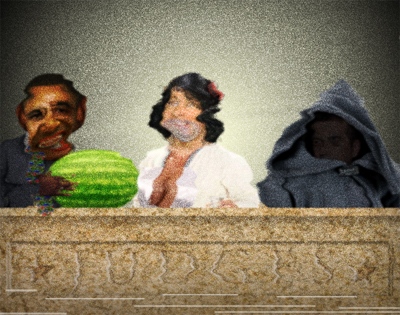 WOMAN: Please, I really need to get to my appointment. I'm pregnant.

HERMAPHRODITE: Wow, that's really wonderful. I admire your courage in being single and pregnant and wanting to take responsibility by coming here instead of an inferior, private charity. I really like the way you put yourself out there.

WOMAN: My baby book said I needed to get an amnio after 16 weeks.

OBAMA: I tell you what, you gotta wrap that shit up, dawg.

HERMAPHRODITE: 16 weeks? That means you've been pregnant for over four months. That's a chronic condition.

WOMAN: I wouldn't call it chronic.

HERMAPHRODITE: It may not seem like it at the moment, but this is the sort of thing that only worsens over time. We can fix you today with a $500 procedure. If you ignore it, it just gets bigger. It might be a problem in your waist now, but pretty soon it's attached at the hip. I wouldn't call that negative liberty! In fact, if left untreated for up to 18 years, the costs to you alone will be over $250,000 dollars. Not to mention the taxpayer's burden. Since we've eliminated market incentives for medical care, we're simply running out of money to fund these programs, and it's not like we can just invent cash cows like the global warming hoax every other day.

WOMAN: But I love my baby. I was going to name him after one of the apostles if he was a boy, or Reagan if it was a girl.

HERMAPHRODITE: Look, you don't know what you're doing. Obviously you've got the body to get pregnant, and you've got the moves to try again. But I just don't think you have the financial range to pull off parenting. I know you're going to say you know better now, but I would hope that a wise Latina woman with the richness of her experiences would, more often than not, reach a better conclusion.

HERMAPHRODITE: -Abdul al-Sotomayor. (pounds gavel) And I think this diagnosis is terminated. (waving hand) You know what to do.

The two UN soldiers grab the woman by the upper arms and maneuver her over a circle in the floor. The circle opens in its center like an iris, and the chamber fills with the pneumatic sound of a vacuum. The woman struggles and screams, but she's eventually sucked down into the aperture.

OBAMA: But you ain't what you say you are.

AL-SOTOMAYOR: I'm at least half that.

OBAMA: Yeah, but not the bottom half. (Obama grabs his own penis through his pants and shakes it) Ahahaha, damn, you're built like a shitbrick shithouse.