BIDEN SEACREST: Wow, I hope I never get as old as that guy. I don't know about you folks at home, but when I got on the government plan, the first thing I did was scrolled until I saw the LOGAN'S RUN option and checked that box. Of course, the age scale depends on orientation and whether you work in the public or private sector, but it's a winner either way. Speaking of ways... hahaha anyway, our last finalist for the evening is from Florida. Jed Rightower is 32 and claims he's suffering from an itchy trigger finger.

AL-SOTOMAYOR: Well, that'll have to come right off.

JED: Lookie here, I didn't come here to have no queer or no arab transvestite or no boy tell me what kind of fingerin I can or can't do. I got a right to finger shit. It's in the second amendment, and anybody who forgets that right is the sorta person who needs my finger the most.

COWELL: I'll tell you what. How about we treat your fingers like you treat the Bill of Rights? We'll lop off nine fingers and let you keep the second one.

OBAMA: Jed, is that how you wanna be a shot-caller?

JED: No way. I don't want any of this bullshit.

AL-SOTOMAYOR: If I may, perhaps a condom could prevent repeated skin irritation, at least up to 99 percent effectiveness, if used while engaging in gunplay.

JED: Hell, no. Only the gays use condoms because of the gay AIDS plague. I'm not buyin somethin that tells everybody in the pharmacy I'm some kinda faggot.

AL-SOTOMAYOR: Well, if you're going to refuse to listen to us, you do have the option of a lifeline. Do you want to get some outside advice?

BIDEN SEACREST: All right, let's go to the lifeline!

Biden sweeps an arm upward, and a movie screen rolls out and downward from the spread hands of The Soros Christ in the caduceus. A projector from above the hall's entryway beams an ever-expanding square of light until it resolves into the image of Barney Frank. 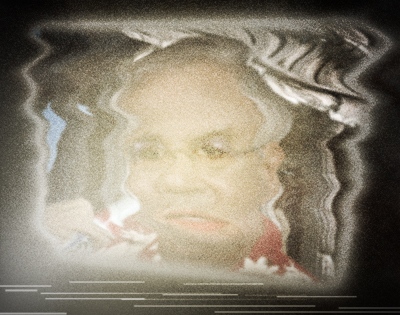 AL-SOTOMAYOR: Barney, have you been watching at home?

BARNEY: Yes I have.

COWELL: And you're aware of the persistent skin irritation that Jed is suffering.

BARNEY: Yes I am.

COWELL: And what would you recommend as a remedy for his problem-

BARNEY: I would recommend Bengay.

OBAMA: Gnnnnngggtttt- (Obama puts his face into his palms and falls forward onto the table in a fit of sniggering)

BARNEY: -it will topically numb the area, preventing Jed from feeling the irritation while using his gun to throw a hot injection into any man who dares to violate his sovereign territory.

JED: What? No way, fuck this. This is fuckin gay shit.

COWELL: Do you mean to say that you reject both our prescribed treatment AND your lifeline?

JED: Hell yes, this is the queerest goddamn shit I ever seen.

AL-SOTOMAYOR: Jed, we don't often ask this, but would you like special treatment?

JED: Special as in queer?

AL-SOTOMAYOR: Special treatment as in it's an option for really hard cases.

COWELL: Jed, when the government program fails you, there is always the option to go with State Farm. We don't recommend it, but some people prefer it.

JED: State Farm? Sign me up and get me outta here.

Both UN soldiers move forward and escort Jed to the exit. Obama lightly bangs his forehead against the table, toppling 40 bottles, and is now laughing so hard and in such a high pitch that he's emitting a kind of keening noise, like something you might hear on the African savanna, where he was born.

BIDEN SEACREST: Ohh-KAY! Thank you, Barney. And now let's show the audience what our last finalist has won!

The screen image shifts to a barbed-wire encampment fronted by a great gate with an archway shaped like a close-bracket turned downward. Inside the arch appear the words, "Du bist in guten Händen." Inside, hundreds upon hundreds of obese people in NASCAR and Jesus shirts aimlessly toil by digging and refilling ditches, mottled by ashen snows belched from a crematory chimney.

BIDEN SEACREST: The State Farm offers a chance for those patients with the most difficult or intractable cases to work through their illness in a program that promotes rugged health and individualism. Talking with other patients is strictly prohibited, as common cause is a form of collectivism and may lead to imagined symptoms. Their treatment stands at the forefront of our Works Progress Administration, finding new ways to harness know-how and put those who might not be able to afford care to work at a job with full benefits. Guests of the State Farm spend their days determined to earn hard and their nights in the #3 Camp. And if someone should falter in their work or fall ill, like a good neighbor, our trained guards are there. Whatever they need. And with that, we are all out of time, folks! This is just a pilot, but we already have a tentative green-light from CBS, America's Most Watched network, as well as interest from the other big three. In fairness doctrine to them, it's not like they have any choice! 24 is next, followed by your late local news!

Mobutu Sese Seko is a blogger and freelance copywriter and, as such, he is made of money. He supplements his income with assets embezzled from the nation of Zaire from 1965-1997. He last stopped by to talk to us about Two and a Half Men. You can read more political/pop-cultural criticism and dick jokes on his Web site, Et tu, Mr. Destructo? Thanks to Ian at FusedMuse for the images!