BIDEN SEACREST: That just goes to show you never know who's going to win with their health care. You know, it surprises me to see Tyrone with two white girls, because of course black girls have such amazing asses. It really makes you think. (looks at card) Annnnd speaking of which, our next finalist is Randolph Lux, a Texan who claims he's been having trouble with his. His ass, I mean. Not his black woman, because, as Texans know all too well, they haven't been able to own any since 1865! Show us what you've got, Randolph!

EMPEROR: Of course it is. Randolph, what seems to be the problem?

RANDOLPH: Your hearing. My name is Rand.

EMPEROR: That's not what it says on this form.

RANDOLPH: I wrote my name on there. It's Rand.

EMPEROR: And I wrote over it, because you're obviously a gross incompetent, Randolph. How you managed to get here without being distracted by a fluttering blossom and nearly asphyxiating because you tried to eat the tree it came from is a medical mystery Dr. House couldn't even solve, assuming he were still alive.

OBAMA: (through a fried chicken leg from a bucket that's magically appeared) He was ballin'. 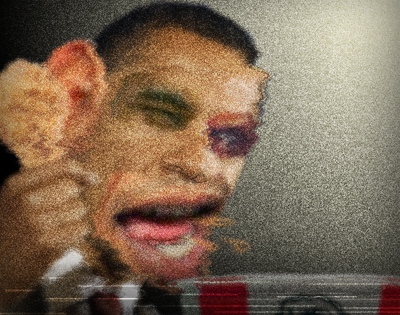 EMPEROR: Are you going to tell us your ailment, or are you just going to prattle on about this name inconsequence?

AL-SOTOMAYOR: You gotta work what you got. You gotta make that work for you.

RANDOLPH: No, it's not that. I've just got these really bad hemorrhoids, like what Glenn Beck had.

OBAMA: Ahahaha that asshole built an asshole addition onto his own asshole.

RANDOLPH: It's not funny. They say the only treatment is surgery.

EMPEROR: That's pre-9/11 thinking, Randolph. If we want to keep everyone safe, we have to make a few cuts. Or not make a few cuts, as the case may be. A hemorrhoid is merely a swelling of blood vessels around the anus. With constant pressure, this swelling can be pushed down and eventually retract into the body.

RANDOLPH: What do you recommend?

OBAMA: We stand now as an America divided. I want you to help us come together and become an America united. In your ass.

EMPEROR: What he means is that we've always known that it's a choice. Anybody can choose to be gay if it's to their advantage. Right now, you want your hemorrhoids to disappear. At college, we want people to embrace liberalism. Why do you think it's even called liberal arts college? So people are free to experiment. Experiment enough, maybe they get used to it and suddenly have only one party to vote for. Or, in your case, they can sit down comfortably.

OBAMA: After the treatment.

Obama hops up and takes a jumper with the now-bare chicken bone. It clatters at Randolph's feet. Obama has also somehow obtained a large bottle of malt liquor with a blinged-out eagle on the label.