RANDOLPH: No, forget it, I refuse treatment!

OBAMA: Refuse treatment? Dawg, this shit is for your own protection. I can tell from this file they gave me, you got a nice asshole. You wouldn't want anything to happen to it, right? You want to make sure we're protectin' you, right?

RANDOLPH: No, it's my right as a free citizen to refuse any coercion upon my person. My body is my sovereign territory.

AL-SOTOMAYOR: Are you saying you have a "right to privacy"?

RANDOLPH: What?-no. I ... I just refuse this treatment.

AL-SOTOMAYOR: Randolph, I feel you. I feel like you're a good person. But I think you're forgetting what the banner says.

EMPEROR: The one on the dais.

RANDOLPH: There isn't one there.

EMPEROR: Bloody hell, I was assured that it was to roll out before we began the proceedings. This was checked by a government employee and made according to and with government certifications. Someone fix this.

One of the UN soldiers moves toward a wide brass rod mounted atop the edge of the stage just in front of the table and hits it with the side of his fist. A white banner unfurls, on which letters rendered in five-foot-tall blocks spell out, "YOU ARE IN OUR HANDS WITH THE ALL-STATE." The O in "our" is represented by the Obama hope emblem, which is cradled in the palm of a pair of manacled hands. Randolph's head and shoulders sink. 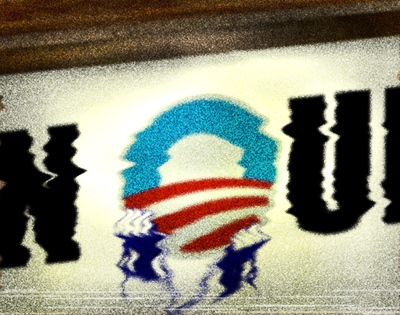 EMPEROR: So you see, you have no choice, Randolph. The highest quality care has already been determined for you. If you'd had the talent or The Market the inclination, it might have made you a doctor. But instead it just made you some poor flyover oaf who didn't know his ass from his ass. Now comes the ugly moment where you must concede that some people are smarter than you.

RANDOLPH: Wait a minute. I know that voice. I've heard that voice before. You're ... you're Simon Cowell.

COWELL: (pulling back hood) So I am.

RANDOLPH: But, why? Why you?

COWELL: Because I'm English, Randolph. We invented socialism and homosexuality. We were already a nation of people predisposed to standing in lines and spending time stuck on boats with men, so it only made sense. The liberals of Hollywood brought us here to complete the transformation of America that began as soon as you got used to waiting to press one for English. Why do you think so many of us are in your movies and TV shows now? We infiltrated. There's only one button you have to press for "English" now. It might be a bit painful in the beginning, but it'll be a bit painful in the end, too. Take him away.

The UN soldiers move to seize Randolph, but he shakes them off in a panic.

Obama pulls a 9mm from a holster inside his jacket and empties seven rounds into Randolph's chest, holding the weapon sideways as he fires. He replaces the weapon in his holster without engaging the safety, a classic display of poor trigger discipline. Randolph's blood oozes into a large pool around his body.

COWELL: We should get a tree of liberty in here for when this happens. There has to be a way to get natural light into this chamber.

OBAMA: I just emptied a chamber seven times at that motherfucker, and at least one of them probably sent him into the light.

COWELL: That's just the brain being deprived of oxygen. There is no light. Read Dawkins.

AL-SOTOMAYOR: There's still all this mess.

OBAMA: Oh, I'm on this shit. (to UN soldiers) RELEASE THE HUCKABEES.

From beyond the circle of light on the floor comes the noise of a metal grate being drawn upward. Faintly, in the shadows, one can see massive wooden crates, with stains running down the outside of the slats. Figures on all fours push their shoulders against the grates, bursting free as soon as they create a wide enough opening. The corpulent bodies of David and John Mark Huckabee tromp across the floor and descend on Randolph's body. They tear him in two with a noise like a head of iceberg lettuce being pulled open, followed by a gruesome snapping. Each retreats to his crate with his prize. One of the UN soldiers laconically waves a hose across the floor as he follows their retreat.