Fragmaster has assembled a documentary entitled "Your Fire Department" from an old reel of film he found while digging through piles of Fireman comics. This is one of the funniest things I have ever seen. Go watch it now! 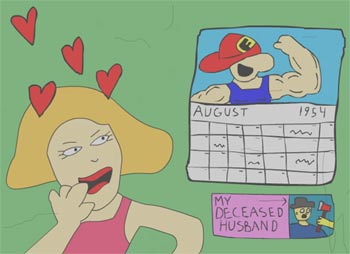 I said GO WATCH IT NOW!

I WILL STAB YOU IN THE FACE IF YOU DON'TGO WATCH THIS NOW! 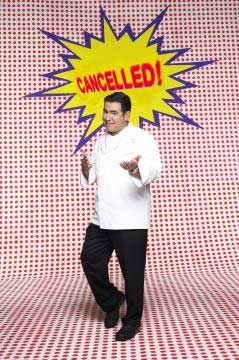 Kick it off the air a notch!Every year at around this time the major TV Networks vomit out a series of new programs in the hopes that one of them will turn out to be the next big hit. All of the networks want to produce the next Seinfeld, 60 Minutes, Tunnel Monkey, or Jeremy Hawk: Colorblind Mathematician. Unfortunately, most of these shows are terrible and doomed to failure before they have even assembled the cast to begin filming the first episode. Also, I believe most programming executives at the various networks constantly trip on LSD and have never met another human being, preferring to make their programming decisions based not on demographics, but on the opinions of the talking phosphorescent lichen that populates their horrifying hallucinations inside their cave hideout.

I respect the hard work of the people directly involved in these shows. I think we need to stop talking about "the next big thing" and start talking about "that show that got cancelled during the opening title sequence". Let's celebrate some of the most monumental failures on TV in the recent past.

Premise: TV Chef Emeril Lagasse cruised on what little popularity he has remaining to be the centerpiece of a sitcom about the life of a TV Chef. This show was a mish-mash of sitcom conventions, terrible screenwriting, idiotic TV morals, and uninteresting cast.

How long did it take? Network executives at NBC were scrambling for a way to travel back in time and cancel this show a week before it debuted.

Why did it fail? It would be easy to blame Emeril for single-handedly ruining his own show, and he does deserve a large part of the blame, but I have to find the true culprits guilty for this show's demise as the executive hacks who thought it would be a good idea in the first place. Honestly, what kind of person green lights a project like this? Oh look, Emeril's numbers are way down on the Food Network, I know, let's give him a sitcom!

Premise: In the year 2020 Ben Matlock (Griffith) suffers from a debilitating stroke that nearly ends his life. He is saved by doctors who give him a cybernetic skeleton and a number of fancy gadgets that help him solve crimes and sing songs about Jesus.

How long did it take? This show was cancelled during the second episode.

Why did it fail? On the surface the concept of a Matlock scifi show seemed pretty solid. Unfortunately the demographic for Matlock has little crossover with the demographic for "The Matrix". In the pilot Matlock hit a little kid while chasing clues in his combat car. He snapped the kids neck with his hands and sold his organs on the black market to buy ammunition for his chest mounted plasma cannon. Matlock lives in a dark future. 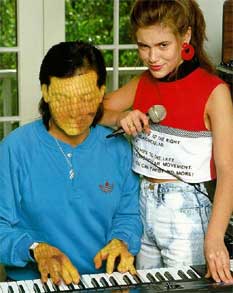 Milano gets corn-fused by Rancho's tickling of the ivories!Premise: A teenager is hanging out with his friends when they see a meteor crash into a farmer's cornfield. When they go to investigate they find that the corn has fused together into a gibbering semi-sentient amalgam of corn on the cob. Compared to Dawson's Creek, the pilot episode featured a sex scene between the corn collective and its teenage girlfriend Shane (Alyssa Milano).

How long did it take? When it cut to Milano wiping creamed corn off her leg after the sex scene UPN executives made the call.

Why did it fail? Oh, you tell me professor programz. It's a fucking show about a corn alien. Not just that, it's a teen-drama about a fucking corn alien going to high school, trying to fit in and having all the problems a normal teenager has. CORN SHOULD NOT BE HAVING THE PROBLEMS A NORMAL TEENAGER HAS.

Premise: I'm not really sure, the MTV-style editing and loopy hand-held camerawork made it look like a music video edited together from castoff Blair Witch Project footage. I do know from reading the WB's blurb on it that it's a "variety show with all the action you've come to expect from extreme sports legends like Tony Hawk, Roger Marino, and Laura Simmons".

How long did it take? The WB actually pulled promo spots for this show some time around mid-summer. While they do plan to air the first eight episodes, that's like getting cancelled during the opening credits on any of the other networks.

Why did it fail? It probably wouldn't have if it had come on about ten years ago. Back then it would have been considered cutting edge. Times were different way back in 1991. George Bush was president, the economy was in decline, and we were fighting a war in the mid-east. But times change, and now this show just doesn't work anymore.

Premise: Who the hell is behind the wheel anyway? This show is about an Aztec Priest who is brought into the present day by magic to work as a Private Investigator in New York City. He solves crimes by eating brains.

How long did it take? I'm fairly certain they pulled the plug on this trainwreck at about the same time Aztec Priest bit into a human brain for the first time.

Why did it fail? Aside from the fact that nearly every scene ended with Aztec Priest eating a human brain for the information it contains, I think this show was doomed because of the premise. Aztec Priests aren't exactly "all that" these days.

Premise: The same fucking unfunny shit gets repeated in a sassy pretentious manner every week as radio psychologist Frasier Krane shits his pants over some improbable scenario. This show used to be called Cheers and it was even fucking worse, but then it got raised from the dead as Zombie Cheers and somehow got slightly less horrible. Still, every fucking episode was about one character misconstruing something another character said. THE ENTIRE EPISODE WOULD BE SHORTENED DOWN TO 2 MINUTES LONG IF THE PERSON WOULD'VE JUST FUCKING SAID "EXCUSE ME, WHAT DID YOU MEAN?"

How long did it take? Like twenty five years or some shit. Jesus god I hate this fucking show.

Why did it fail? It didn't! It took an act of terrorism blowing up the executive producer to finally put an end to this tragedy. I mean I didn't wish death on the poor guy, but if Frasier had gone on much longer I would have been wishing death on myself.

Every year the networks spend the first 9 months or so preparing another volley of shit to fire at your TV screen, and every year only one or two of the turds actually sticks enough to stay. Some may cling for a year or two, the rare and lucky few will get to spend ten years or so stinking up the airwaves, but the majority fall back into the slop bucket of bad ideas that spawned them. We should be thankful for that part.