The Rambunctious Rhymes of Groggery Gibbonman 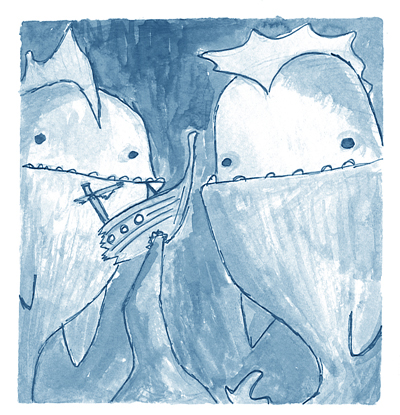 Jeremy and Jonathan
Brothers and leviathans
Wandering the trade routes in the sea.

“What could that be?” Jonny asked.
As on a sandbar they both basked.
He pointed past his brother Jeremy.

“I don’t know” Jeremy replied
As he looked down, and there he spied
Just what exactly Jon had eyed.
The shipwreck left beneath the water’s lens.

“We should explore it!” Jon announced.
And underneath the waves they pounced
To swim with churning flips of massive fins.

Ever darker they descended
‘Til the pressure nearly rended
J. and J. Leviathan asunder.

But bursting as they were with pride
They felt but buzzing in their hides
(Each, incidentally, 4 miles wide)
And spiraled deeper, further, blacker, under.

It was at seven million leagues
The brothers, hardly yet fatigued
Arrived atop a spire from the deep.

And punctuating at its tip
An ancient, scrimshawed Viking ship.
Its decks alive with ocean’s gradual creep.

The sun had long since full refused
To reach so far beneath the blues
Of ocean, now a dark cathedral dome.

Unearthly still and glassy clear.
So far beneath the waves and piers
And boats that thrash, and tides that froth and foam.

But from the ship a gentle glow
Provided just enough as so
The brothers’ curiosity could feast.

Upon this derelict so dim
They’d followed at a moment’s whim
(Or Jon did. Jere just followed him)
A ship carved long before the Norsemen ceased.

“What do you think it is?” inquired
Jeremy, his interests fired
Up by this unearthly glowing sight.

“Of course” said Jon with great aplomb.
“It is a flute for playing songs”
And with that, tween frightening prongs
He grabbed the ship and blew with all his might.

The brothers laughed, the sound it made
Was not a gentle serenade
But rather an offensive kind of BLAAF.

“Now look at this!” Jon pointed to
the skeletons of Viking crew
which flew out of the hull like scattered chaff.

The brothers were so much intrigued
By what they’d found so many leagues
Beneath the sea, they brought it up again.

And Jonathan and Jeremy
Shot skeletons out from the sea
Into the town with endless glee
And watched the shambling murderous spree
As Viking ghosts ransacked the keys
What fun it is to be leviathans!

When you're caught up on the Groggery series, check out Ian Helm's Comfy Award-winning 2010 writings here.