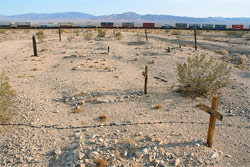 An anonymous desert grave might have been better.I swayed into the cemetery and somehow found my way to her grave site. It was in a portion of the cemetery that had not received much in the way of landscaping. That's putting it too kindly. Her grave was in the furthest corner of the cemetery in a square of land that had no vegetation. Not even weeds. Serial killing truckers murdering hitchhikers and burying them in the middle of the desert find more scenic resting places for the bones of their victims.

Her headstone was a cheap concrete "stone replica" of the sort someone might buy for their pet's backyard burial.


I chuckled at the idea that God had wanted anything to do with Lindsay and sank to my knees on the recently tilled earth of her burial plot. Maybe it was the dust blowing off the fields, maybe it was the booze sweat running into my eyes, but I know that at least one tear welled and rolled down my face.

I laid my ear on the grave and mercifully lost consciousness.

Intense heat and a loud hissing sound roused me from my torpor. My face and clothes were caked with dust that had turned into a horrible body mud on contact with my sweat. It felt as though someone had plastered my skin. My head pounded and my stomach churned with the after effects of the preceding night's binge drinking.

I sat up with a groan and found myself eye-to-black-shadow with a figure silhouetted by the sun.

"Get up you piece of shit, that's my grave!"

Rough hands lifted me to my feet and I saw the impossible. Lindsay Dawn Riley, in black acid-washed jeans and a black t-shirt for Kool cigarettes, was standing before me. Her unruly hair had been greased back into a sort of wet rat's pelt and her makeup, as ill-advised as ever, meandered around her face in psychedelic clown prints.

She clapped her hand roughly on my crotch, painfully jostling my testicles.

"Coming to pay your respects?"

She roared with laughter. Something hissed loudly in the distance and cars suddenly began honking their horns.

"I thought you were dead," I explained unnecessarily as she began brushing the dust from my clothes with unseemly enthusiasm.

"No shit," she spit in her palm and reached for my zipper, but I backed away.

"Alive?" She shrugged. "Not like I planned it. I was cooking up some thermite to put through the engine of an ex-boyfriend. Gumby. Rolls third with the Latin Kings. Total piece of shit."

She made for my zipper again and I swatted her hand away. She gave me a hurt look and then barked with laughter.

"Lucky thing," she continued. "I had a skeleton I stoled from the vocational school science room for Halloween. The dumb town thought it was me that burned up, so I just went with it. I owed a shitload on the credit cards anyway."

I shook my head and smiled.

She lifted her shirt and her pale udders flopped free with a bounce. I had a flash of puffy saucer-sized red areolas before I turned away.

"Come on, you didn't come all this way for nothing. Get some sugar."

That was enough to send me running, or stumbling as the case was in my disheveled state. Lindsay stalked after me like a Terminator. Her bloodshot eyes bored holes in my back.

As I reached the street I could feel her presence at my back, the questing hands that might lift me up by my belt and reach down my pants to do something calamitous to my lower half. I could run towards the city center, risking the slowdowns of pedestrian traffic and construction in favor of finding a cab, or I could run away from the city, risking heat stroke and my bones being picked clean by coyotes. 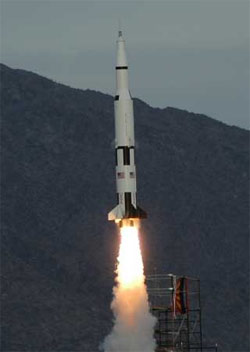 Fate is poor guidance.There was a growing thump-swish-thump-swish from behind as Lindsay stalked through the greener plots of the cemetery in my direction. I had just decided on risking death in the desert when there was a loud roar and hiss from across the street.

I looked in the direction of the sound to see, much to my surprise, Mort and Todd standing next to a barren launching pad. Their eyes were looking up, following a column of white smoke. I squinted into the sun and looked up too, following the trail of their scale model Saturn V rocket. The rocket was still hissing under power, spitting out white smoke in delicate corkscrews. I followed the trail up and up and then it turned.

I realized, too late, that Todd and Mort were suddenly looking directly at me.

"Lo-," was all Todd had time to scream before the Saturn V rocket hit me right in the middle of my forehead.

I don't remember hitting the ground, but as I clung desperately to consciousness I distinctly remember Lindsay Dawn Riley's darkness falling over my head. I remember her shadowy fingers, like those of Nosferatu, creeping towards my zipper.

I also seem to remember that my shirt was on fire. After that, it's all a blur.