Been Longin' for Bin Laden

Now this next image is Bin Laden rockin' the Classic, but he's not posin'. This is real life Bin Laden from some video he filmed like in 2001. 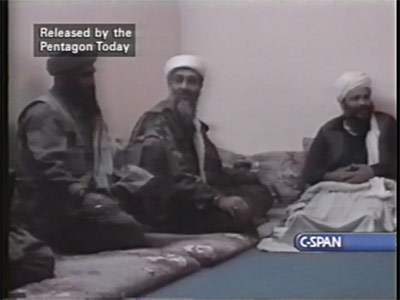 No more flossin' in the tent, Bin Laden only cruise in style. Now he like a top-shelf P. Diddy type what with his bare ass walls sittin' on the floor like dirty babies with his friends on a couple of blankets or some shit. That is some depressin' ass shit, right there.

Yo, I read the translation for this shit and these niggas is all "we rule the world" and "hell yeah, we blew that shit up in New York it was Hot 97 times 50." Meanwhile, damn, nigga, hang a picture of a rottweiler back there or something. Some posters of Beyonce or New Kids or anything man. Draw a fuckin' face on the wall with a marker, I mean DAMN. Lookin' like when the police open a shipping container on the docks and a bunch of fine ass Hungarian bitches come up out a pile of Pop Tart wrappers all messed up and blinkin'. I mean a potted plant or something, goddamn.

Now, here, this is the third picture and this is one of those ones that straight up flopped on its ass. CIA and shit all declaiming that shit. This one dropped in like 2006 I guess or something. Bin Laden got up out of the basement and put on some new clothes. This look I like to call Terrorist Casual. 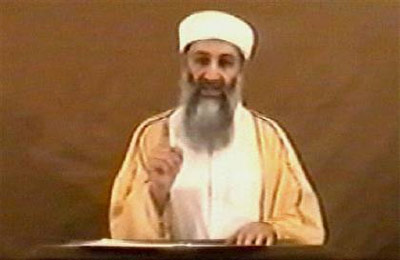 This is just Osama relaxin' in his crib talkin' up his bullet points of killin' whitey. He ditched the camo for some sort of track suit or something. I think that shit is like tangerine or goldenrod. It is fly as hell compared to Osama Bin TacOps. He is still rockin' that weird ass white shirt scene, maybe spice that shit up with some gold chains get you some 500 diamonds spellin' out JIHAD on some niggas.

The setting ain't much better than the bare ass room in picture number two. He's got a podium kind of thing, so that's an upgrade, but what the fuck is up with that butcher paper shit in the background? Lookin' like he gettin' a picture takin' at Six Flags wild west portraits or some shit. Also you got to recognize, Bin Laden ain't never have no honeys swarmin' on his sleeves. Go on, playa, get you some belly dancers or maybe some girls makin' they ass clap in the background there and you take things to a whole new level.

The new picture we about to debut is supposably Osama this year for some anniversary of 9/11 and shit. Give some warnings and ominous intonations and what have you on the topic of blowin' up some more buildings. The video ain't out yet so I don't know what he say, but I do know his look has changed. So let's check that shit out. I call it Pimp Laden. 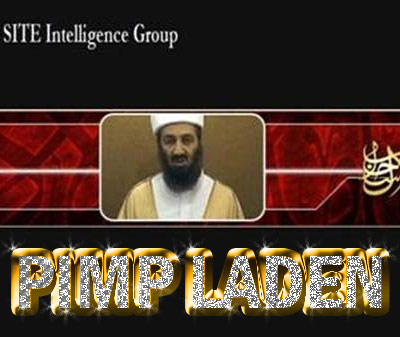 Oh ha ha ho ho holy shit, nigga! Look at that motherfuckin' thizz face! That is straight pimp! Nigga is tore up like he got raised up in the pits by Michael Vick. Eyes all droopin' and shit, you know Osama hit them trees like a California fire. I'm surprised Air Force didn't drop no heat-seekin' missile down on that mushroom cloud of nug stank comin' up out of Pakistan.

Okay, yeah, Osama is still wearin' the same filthy ass shirt he was wearin' in the video a year ago. I guess caves don't come with no walk in shoe closets, but I mean ain't there no nigga wear the same size shirt as you? Maybe trade up and put on a red shirt or a black shirt or something for the next big video?

Whatever, maybe he got cash flow problems what with bombs droppin' all over maybe hit First National Bank of Al Qaeda inside a hut or something. It's all cool when you look at that beard. I see somebody got they Amazon box full up on 300. Nigga recognize shit was gettin' out of hand there, lookin' like Gimli or some shit. He trimmed that up good and put some black back in it. Ain't nothing wrong with a man his age doin' a little coloration. You got to look good for your public.

Overall, I think Bin Laden has made some great strides to improve his images. He ain't goin' to be rollin' out no Sean John shit in Italy, but he got his own style ain't nobody compromise. Maybe in like 50 years that shit will be cuttin' edge or at least be like a FUBU type shit.

I am really lookin' forward to the tracks he lay down in this latest release. I know we get to hear about death to America and shit, you know, the ones that bring the crowd, but he is always throwin' in references and shit so you know it is modern and not some shit the CIA can debunk. So he might roll out there to his podium and be like, "Death to America and did you hear Rosie left the view, this a thousand travesties I will fill your streets with blood."

He always got a curveball too, like tryin' to affect elections and shit. Maybe like, "Oh, the Republicans make me so mad, I hate them so much, America will be punished if they elect those cats. But oh, the Democrats, they are good friend. They are my ally." Then you know every nigga out there is like "Those Democrats hang out with this dude with the beautiful beard?" and they all vote for Tom Tancredo and shit to get rid of a Mexican next door.

Anyway, September 11th, be sure to catch that shit. It is probably going to be something hot as hell.