My Favorite Bums in Rome 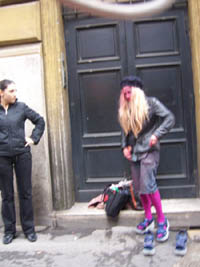 Maybe I was wrong with the first two. Maybe they aren't crazy. Maybe Bus Man is stoically defending his panty-wearing lifestyle and Lasagna Dress is taking a large step in feminism. Regardless of my previous assessments, The Pink Lady is undeniably insane.

I saw her on my first afternoon of wandering around the city. She was nervously pacing around a heavily congested tourists spot (Piazza Navona.) Now, the site is famous for street performers who dress in fun costumes in an attempt to get money, so the Pink Lady fit right in. Her face, colored a bright lipstick pink, is partially covered by her knotted blond hair, her matching pink socks were tightly crammed in high heeled sandals, and her leather jacket was a size or two too small. Compared to the "frozen business man," the Michael Jackson impersonator, and all the other street performers, she seemed a little lazy in her outfit, but oh well. I watched her walk back and forth for a little bit, anticipating a fun routine. Instead of a song and dance, the Pink Lady leaned forward a little, letting her hair drape over her face, and vomited on the Roman cobblestones. She then knelt down in her own sick and grabbed something before looking up, letting her now wet hair stick to her cheeks. Our eyes met. We both froze. I assume we both felt nauseous, but I am really only sure about myself. Then she quickly jumped up and scurrying off into a narrow ally. I gave the performance 3 stars.

I thought that was it. A clown got sick, nothing strange about that. But the next morning I ate breakfast near the Pantheon, another heavily crowded tourist site, and there she was. I could see her pink face bobbing up and down among a large crowd of Asian tourists. The majority of the tourists were too busy taking about 50,000 pictures to notice, but one small Asian girl was staring at her. The child giggled as the woman approached, expecting that anyone that colorful must be a clown. Once the Pink Lady was a foot away, she slowly bent down until she was eye level with the little girl. But instead of handing over a cute balloon or doing a quick magic trick, the Pink Lady let out a bloodcurdling scream. The little girl, who was previously ecstatic from the attention, screamed back. The child's mother screamed at the both of them before grabbing her daughter and running off, and the pack of Asian tourists started yelling and running around like a spooked herd of antelopes. Eventually the crowd simmered down and everyone was looking for the Pink Lady, but she had already scurried off again. I gave this performance a perfect 5 stars. It was flawless.

So I had been in Rome for two days, and I had seen this woman twice, each occasion marred by her insanity. I decided to ask my program's director about the woman. Apparently the Pink Lady was once a model, a rich model. She bought an apartment in the center of Rome and filled a bank account with cash before going absolutely insane. Her face wasn't lipstick pink face paint, but actual lipstick, which she purchased daily for the sake of rubbing it all over her face. Her afternoons were filled with buying the same items she already had (note the shoes she is trying on,) carrying handfuls of empty shopping bags she found in the trash so it looked like she just went on a shopping spree, or screaming in children's faces. She was pretty notorious in Rome for her terrifying habits.

As I said earlier, craziness translates the same. Once I was walking down a street with a friend and we heard a loud echoing scream. We laughed. A young French couple was walking beside us, laughing as well about "la Dame Rose."

So Italy was amazing. I suggest everyone go, or at least go see a different country, even Canada counts. Experience a new world, and if you get homesick, just search for the homeless to make you feel comfortable. Hell, anything is better than the new Rambo movie.