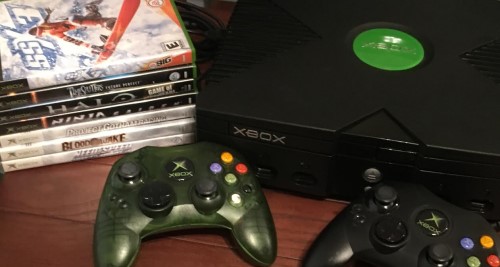 This suspiciously clean Xbox was $50 at Goodwill. It came with two controllers and a handful of games. Honestly, I would have paid $50 for the Mountain Dew-colored controller alone.

Just look at that chunky plug! 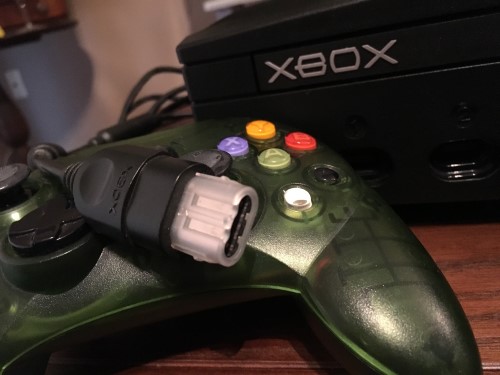 The rounded groove for your thumb. That thick layer of plastic surrounding the metal. Do you know how satisfying it feels to plug those in and unplug them? It's downright perverse.

My Xbox also came with a shitty composite cable and the system's default 8GB hard drive. The plan: Mod the system, stick a bigger hard drive in there with a bunch of games, and find the best possible video cable.

First I had to open up the system and remove the clock capacitor, a component specifically designed to burst open and spill corrosive juice on the Xbox's motherboard. Seems like a weird thing for Microsoft to put in there. Then again, I'm not a hardware designer. The capacitor came off with a solid twist-and-tug (my high school nickname). What amazed me was the total absence of dust inside this fifteen year old system. The previous owner must have played this Xbox for one afternoon then stored it in a microprocessor facility's clean room.

I'm going to be very honest with you. Modding the Xbox and installing a new hard drive was easily the biggest pain in the ass I have experienced while working on this column.

There are a ton of conflicting guides, written years apart, all of which leave out key details under the assumption that you know things no newcomer could possibly know. Also, for some reason, you have to use the default composite cables during the entire process or it just won't work.

Here's the closest thing to a complete guide I could find, if you're interested in doing it yourself.

Once you've softmodded the system (lol good luck) it's time to replace the hard drive, which is basically surgery, which must be performed WHILE THE XBOX IS RUNNING AND ALSO YOU ONLY HAVE FOUR SECONDS TO MAKE THE SWAP: 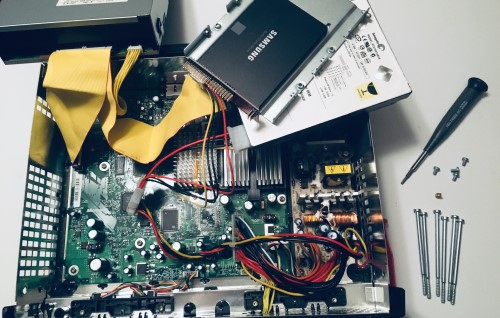 What a nightmare. What an absolute nightmare of computer guts and cables and things that go wrong!

First the 24-inch cable I ordered from a third party Amazon seller with a name like LuckyRealGoodproduct was barely 14 inches. Not a good start. Then when I finally had a good cable and the right IDE to SATA adapter and my spare 120GB SSD, I attempted the tightrope walking surgery bomb defusal process. Five times. With no success.

Was I not replacing the drive quickly enough to overcome the four second countdown? Did I have a jumper set in the wrong position? No, it turned out that the hard drive cloning software's folder (which I did not rename) was named incorrectly. Once I removed a few numbers at the end of the folder name it worked. Of course.

When it was all done, however, and when I had installed a new UI and some games I did have this: 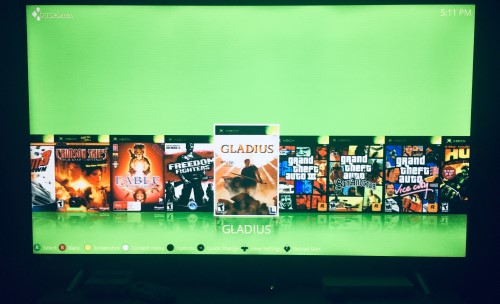 Worth the hassle? Yes, Gladius alone was worth it.

Choosing a video cable for the Xbox seemed like another hassle. You either shell out $80 for official component cables or spend $30 for demonstrably worse picture quality from a third party pair of component cables. OR you spend that same $30 on a Retro Gaming Cables' Xbox SCART cable and get the best possible picture quality when run through something like the Open Source Scan Converter. Do that. Hey, really, do that. SCART is my go-to for every system that supports it.

This is the third system I've tinkered with for this series, and I still can't get over how good pre-HDMI games look on a modern tv when they're cleanly upscaled with proper scanlines.

After spending a month and a half revisiting the system's library I put together a ranking. This is official, and final. It overrides any and all Top/Best Of lists and is legally binding.

A Rank (Alright, play it Rank)

B Rank (Been meaning to play, still haven't Rank)